I enjoy long cycle rides, and last year I found myself looking for a challenge combining technology (route planning and bike tech), sport and local culture. I wanted to show what’s possible with lower-impact transport, plus my love of languages and geography made crossing natural and national borders very appealing. So why not try to set a cycling record in this context?

Browsing the Guinness World Records database, I found that the record for the number of countries visited by bike in one day, held by Glen Burmeister from Leicester, stood at four. A look at the map of Europe indicated that it would not be impossible to cycle through five countries in a day. But more than just a record for the archive, this would also be a test of the virtual and physical cycling infrastructure, such as cycle-paths, maps, and route planning applications.

I decided to make my attempt on 22 April 2016, which would be Earth Day, the annual global day of support for environmental protection, and also be the day of the signing of the Paris Agreement on limiting greenhouse gas emissions.

Since the tour would only take one day, I could travel light. I would ride my lightweight hybrid bike, which for ten years has been used for commuting, shopping, distributing Camcycle newsletters and pulling bike trailers, and had been tested in the CTC Cambridge 200km Audax. It was fitted with a luggage carrier, mudguards, puncture-proof tyres and triathlon bar (which I had learnt to appreciate on my longer commutes). Aged wheels, brakes, chains, gears and saddle were replaced; as for tools and spare parts, I took only those necessary for very basic repairs/adjustments, such as fixing a flat tyre.

I had hoped to produce a time-lapse of the whole tour, but this was far beyond the handlebar-mounted camera’s battery capacity, so instead I would take photos manually every few minutes. I also took a small portable power bank and a hand-cranked charger to recharge my gadgets if necessary.

It was clear from the start that I would begin my journey at the ‘Three Countries Point’ on the Vaalserberg near Vaals, where the Netherlands, Belgiumand Germany meet. I selected Évrange as my finishing point, a village at the French/Luxembourg border that was as close as possible to Vaals, with overnight accommodation available and at an acceptable distance to railway connections. I planned to pass through various towns for food, shops, bike repair (if necessary), and people to witness my tour, e.g. in town halls and tourist information centres. All these places are more or less connected with the expressway known as European Route E421, for which I would need to find a bike-friendly parallel route. My detailed planning used Cyclestreets.net and the cycling mode of Google Maps.

On Cyclestreets the ‘fastest route’ included roads designated as ‘hostile’ to cyclists. The ‘quietest’ and ‘balanced’ routes, as well as Google Maps, favoured unpaved forest tracks over quieter roads, but these would add too much time to my ride: over 15 hours versus 11-12 hours for the fast route. Fortunately both apps could also find the car-free paths of the RAVeL (Réseau Autonome de Voies Lentes), a Wallonian network similar to Sustrans that converts e.g. disused railway lines to car-free paths. It connects with the similar LF (Landelijke Fietsroutes) in the Netherlands and Flanders, and EuroVelo. My planned route was about 180km long, passing over Belgium’s highest point, but I also planned a lower but slightly longer route in case of bad weather. Altogether, I used a combination of (mainly) the ‘fastest route’ of Cyclestreets and Google Maps as a guideline, assuming the ‘hostile’ roads to be acceptable out of peak hours, and I was hardened by cycling to Cambridge Research Park on the A10 for the last three years. 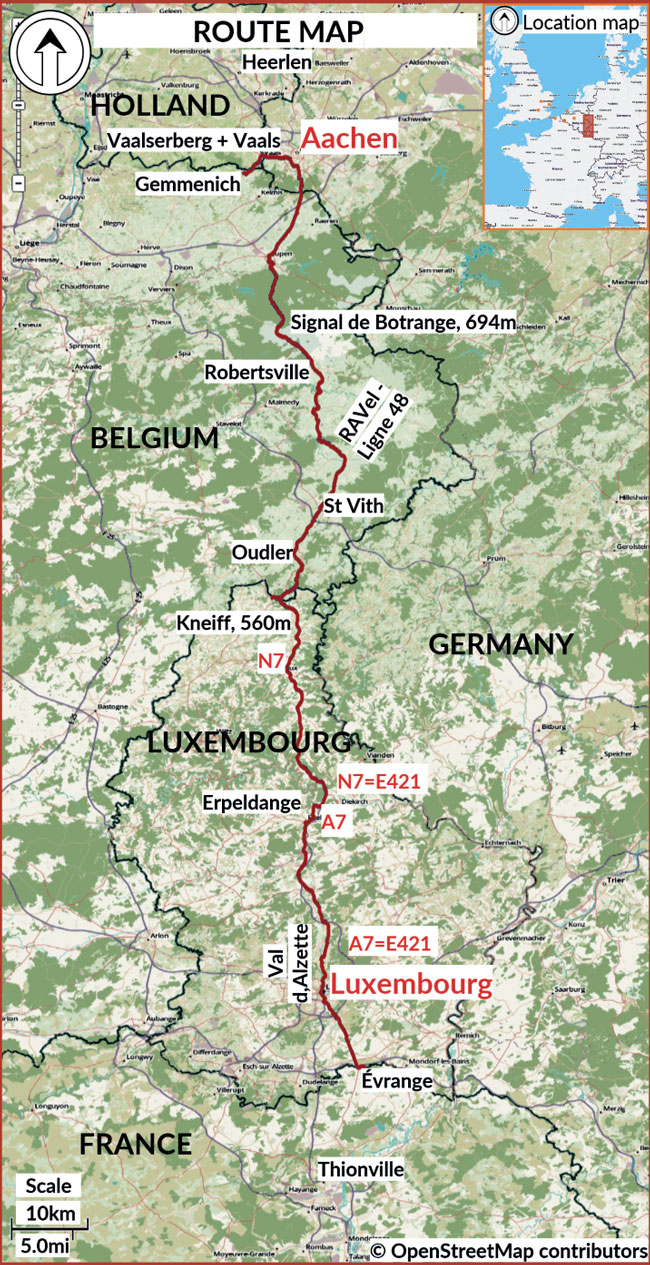 To get to the Netherlands, I used the ‘Dutch Flyer’ offer, which covers train travel from Cambridge via the overnight ferry from Harwich to Hoek van Holland, to Heerlen, at the other end of the Netherlands, the closest station to the tri-countries point. My bike also needed a ticket for the ferry (£4) and for the Dutch trains where the bike areas provide a nice meeting space for cyclists. I set off from Heerlen in my rainproof cycle jacket and jeans (unfortunately the lycra had been left at home). I cycled past deserted border posts to the former Imperial City of Aachen, where I admired Charlemagne’s cathedral and the sulphurous smell of the thermal springs. I then crossed back into the Netherlands to cycle up the country’s highest hill (Vaalserberg, 322m), where the Netherlands, Belgium and Germany meet (in addition to observation towers, there is also a maze). Before World War I, this would have been a four countries/territory meeting point, as it also included the Neutral Territory of Moresnet, for which there were once plans to make Esperanto its official language. Today, it is part of the German-speaking part of the French-speaking part of Belgium, through which the first half of the tour would take me. Soon after a rapid descent of the Vaalser serpentines, I arrived at the Grunebempt B&B in Gemmenich, Belgium, where I stayed overnight.

At 6.09am, shortly before sunrise, I set out from Gemmenich. The weather was very good, with 15° C, only a little sun and wind, and no rain expected until the next day. I returned through Vaals to Aachen and took a rural road to Eupen, where I dropped into the town hall and was briefly interviewed by the local newspaper ‘Grenzecho’ (which translates as BorderEcho, very appropriate for my challenge). Next the route climbed south into the desolate boggy landscape of the Hohe Venn/Hautes Fagnes (meaning ‘high fen’ in German and French) where granite rocks prevent rainwater draining away, leading over millennia to the formation of peat bogs of sphagnum moss. The Ardennes have been a classic cycling region for many decades and a handful of racing bikers were on the road over Belgium’s highest point, the Signal de Botrange (694m). This has a concrete staircase at its peak to increase its height to 700m, but I did not attempt that final climb by bike! After a rapid descent I crossed the Robertville reservoir, followed by a fast and very pleasant ride on the Vennbahn cycle-path, part of the RAVeL (Ligne 48). However, near St Vith, I met a dead end due to construction work on the RAVeL. (I should have consulted the RAVeL website for updates.)

To make sure that my trip remained something of an adventure, and to stay aware of the local environment, I had decided not to rely on GPS for navigation outside the towns, instead following a map and signposts. This worked well at first, but near Oudler unfortunately led me onto gravel forest paths instead of the Vennbahn. Emerging from the woods, I crossed the unnoticeable border into Luxembourg and cycled up to a field which a half-readable plate identified as the country’s highest point (Kneiff, 560m). Again I accidentally chose an alternative route, this time the E421 expressway towards Luxembourg City. Thankfully cyclists were well respected; in fact during the whole journey, I was only honked at twice (and once sprayed with windscreen wash, by a Stag Tour with UK number plates). Finally, near Erpeldange a sign commanded errant cyclists off the motorway and down the scenic Alzette valley to Luxembourg. The city of Luxembourg sits above a dramatic gorge but happily the shops were now closed and commuters were at home, so my crossing of the high bridge over the Pétrusse was uneventful. I continued south along already very French-looking avenues, lined with trees in bloom, towards Thionville.

Approaching the French border, the dashcam that I had set up to record the final approach ran out of power. Undeterred, I used my hand-cranked charger. It was very rewarding to generate such important electricity with my own hands. With the camera again active I crossed into France at Évrange around 8.45pm, just as the sun set, and stopped for a photo at the church. Searching for someone to officially witness my arrival, I heard music from a nearby school, where I was greeted by volunteers preparing for a charity event the next day: a motor-bike rally where riders go door to door selling roses for a cancer charity. I joined them for a while before retiring to the nearby hotel.

In total, my journey had taken 14½ hours. I had been in motion for about 8½ hours, and spent the rest of the time collecting signatures on the official witness forms, eating and just enjoying looking around and taking photos.

Getting out of bed the next morning was easier than anticipated! I cycled through light drizzle back to Luxembourg railway station, dutifully sourced the local drinks and confectionaries that I had promised to export and then caught a train to Brussels, from where I took the Eurostar to London (with a £25 charge for my bike). The regions I had travelled through had changed hands several times and seen many bloody battles, reminders of which remain throughout the area; whizzing past Calais reminded me that borders can still be a deadly reality.

Back home, I overloaded the Guinness World Records website with photos, videos and GPS tracks (I used the free GPiSync software to geo-tag photos). In June I found that my record had already been broken by the audacious Michael Moll who cycled through six countries in a day, crossing the Alps, which I would not have considered possible – at least not with that power-train. Not that this mattered when my Guinness World Record certificate arrived in September, and anyway, what is a record after a day when rider and bike had worked so well together in relation to their environment, so well in fact that despite all the physical effort I really had felt no exhaustion whatsoever.