Whenever I look at maps, I like to find patterns. Look at a modern map of Beijing, for example, and all you see are six ring roads. Houston, Texas has a similar pattern – although they call them loops. When I look at the cycle map of Cambridge, I don’t see any patterns. Simply, I’m missing a strong network of easily identifiable and understandable routes that allow people to go the places they need, without getting lost at every junction.

Cambridge has multiple centres: a biomedical campus towards the south, the science park to the north east, the airport to the east, the university to the west, and not forgetting the city centre in the middle. The area that people think of as Cambridge will only grow wider as new centres develop in Northstowe and other surrounding areas. I have therefore concluded that we must design a network of bicycle routes that accommodates this multi-centric development pattern.

To achieve this, we need to connect all the villages around Cambridge with the city centre, these villages with their neighbours, and everybody to where they want to work, learn, or play.

Looking at a map of a city, you will find radial routes and orbital routes. The radial routes go in and out, while the orbital routes take you around the major congestion. Therefore we need a network of radial and orbital strategic cycle routes that link where people live to where people need to go. This is a model that works well in the car world, using ring roads, loops, beltways, orbital motorways, and the like, and therefore I believe it should also work for the bicycle. 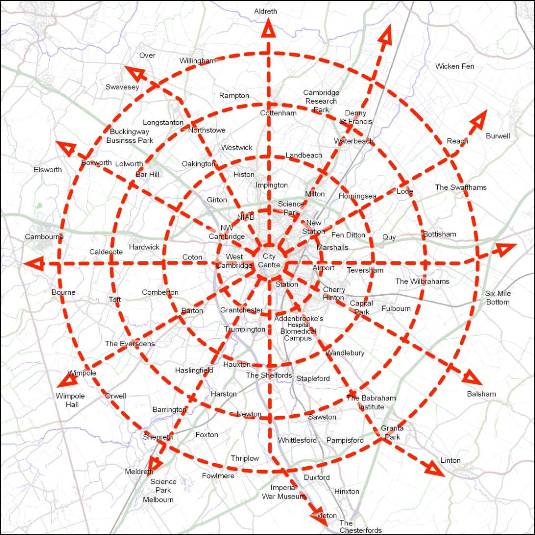 This has been suggested before, back in Newsletter 51, but I think we need to plan for a network that is a lot bigger and bolder than before. To achieve this ambitious plan, I propose that we plan for twelve radial routes and five orbital routes. The routes are indicative of the general location of the strategic cycle routes are desired, but I’m sure that the actual routes may need to take account of the realities on the ground.

There should be twelve radial routes based on the numbers on a clock face. These would link the centre of Cambridge with all the surrounding areas. (See table below.)

Each orbital route would be an approximate distance out from the centre of Cambridge. With the name of the route based on the distance from the Market Square. These routes could be named Ø1, Ø3, Ø6, Ø9, and Ø12.

The inner orbital, Ø1, would follow the existing inner ring road. Significant improvements are required here, as exemplified in the recent Newnham to Newmarket Road campaign.

Next out would be the main Cambridge orbital route for the major employment sites. The Ø3 ring will thus link the Science Park, the airport, Addenbrooke’s, and West Cambridge, with new housing at Trumpington, North West Cambridge, NIAB and Orchard Park, and the new Cambridge Science Park railway station. It will be inside the existing A14, M11 and A11 orbital motorways.

Some of this already exists! If you cycle up St Ivo Way (Guided Busway) from Milton Road up to and through Orchard Park you would be on Ø3. Plans are in place to link this through the NIAB development to Huntingdon Road, and then through NW Cambridge to Madingley Road. With the Chisholm Trail and the bridge over the river, we could even see this extend south of the river towards the airport and Addenbrooke’s Hospital along the outer ring road.

The greenbelt orbital, Ø6, is going to be a lovely route linking all the nearby necklace villages together. You can imagine young families from Cambridge cycling out on to Ø6, cycling around Cambridge through green fields, and then back in on another radial and back home.

Ø9 will provide an excellent link between all the new developments outside the greenbelt. It would also link many of the existing village colleges with their neighbouring village catchment areas.

And then even further out will be Ø12 linking many of the tourist destinations, Wimpole Hall, Wicken Fen, Newmarket Racecourse, Linton Zoo, the Imperial War Museum at Duxford. This last orbital will provide the foundation for building a truly sustainable tourist industry in Greater Cambridge. A full ‘orbit’ around Cambridge on Ø12 would be close to 75km.

Placing all of these on a map shows how the network of cycleways can really bind the Greater Cambridge area together into a cycling paradise for businesses, families, and tourists.

All this will require aproximately 340 km of new or improved cycleways. At aproximately £250,000 per km of cycleway in the countryside, but significantly higher costs in the city, this will be a £200m project. The benefits to Greater Cambridge through reduced traffic congestion, a healthier population, and more productive businesses will be worth over a billion pounds. Can we afford not to do this?