Homerton Low Traffic Neighbourhood is opposed by a damning 64% of survey respondents but it is being made permanent. What is going on here? Alan Ackroyd continued his exploration of London LTNs by taking a closer look at the scheme and its engagement survey.

Hackney Council introduced the Homerton LTN for a trial period in June 2020. On 3 December 2021, the council published the results of their consultation exercise and announced that the scheme would be retained. 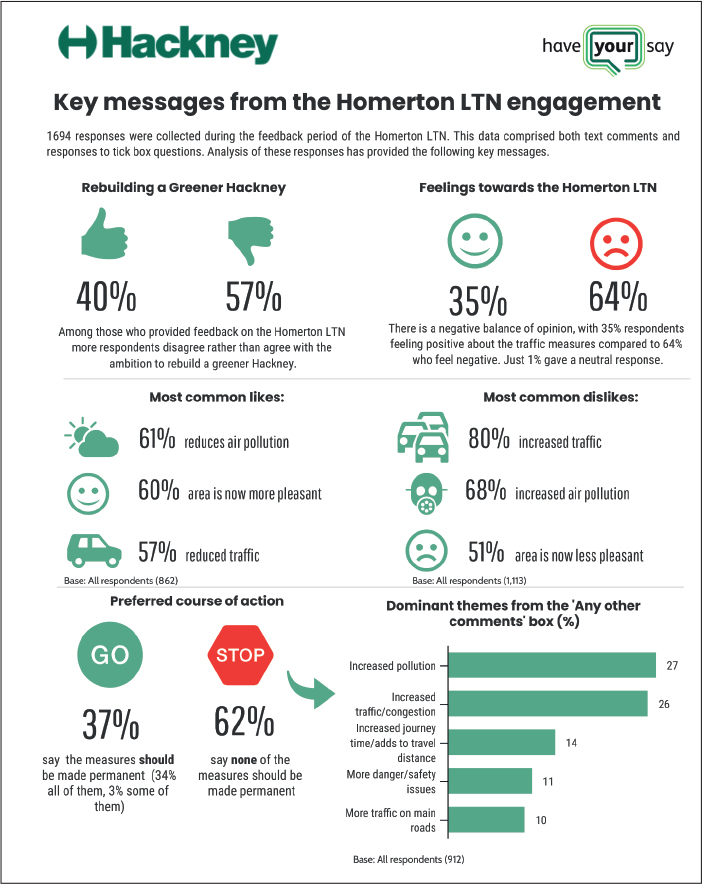 Why did it make this decision? There are two factors to take into account in understanding what is happening here. The first is in the way the scheme was set up, the second in the council’s response to the survey.

The scheme was set up with clear measurable intentions set out from the beginning:

The metrics to gauge success in achieving these goals were clear and enabled to the council to rate the success of the measures they were taking:

Hackney Council was able to show that its LTNs were doing what they set out to do, therefore they stayed.

The council has published detailed statistics on the first two of the above points in the document explaining its decision on the Homerton LTN. A separate study on bus performance looked at average speeds and excess waiting times (i.e. how far behind schedule buses are running). The significant improvements in all these metrics are backed up with detailed figures. This shows the importance of a clear understanding of why traffic management schemes are being introduced and making sure unimpeachable measurements against these goals are in place. Hackney Council was able to show that its LTNs were doing what they set out to do, therefore they stayed.

The second interesting aspect of the decision to keep the scheme is the council’s handling of the survey responses. A detailed analysis of the survey results (45 pages) was published and opposition to the LTN was plain to see!

Amongst other things, the analysis noted:

The main aspects of the LTN disliked were:

It is notable that the council was able to provide hard statistical evidence that traffic around and within the LTN had, in fact, decreased and air quality improved, making these objections questionable, if not groundless.

The last question of the survey invited general comments and any suggestions for improvement. It was noted that most comments mentioned increased pollution, increased congestion, and inconvenience. Also raised were two particular safety issues; a number of women reported feeling less safe in quieter streets and a number of cyclists reported being the victims of more bad-tempered driving. Elderly and disabled people needing to use vehicles for medical appointments and basic mobility reported greatly increased journey times and consequent difficulties.

Several observations may be made in response to this survey analysis.