Alan Ackroyd visited a new LTN in Hackney to gain insights to apply to similar schemes in Cambridge.

On 30 September 2021 Hackney Council introduced a series of Low Traffic Neighbourhoods (LTNs) around Stoke Newington and placed a bus gate in Church Street. It will be reviewed after 18 months. 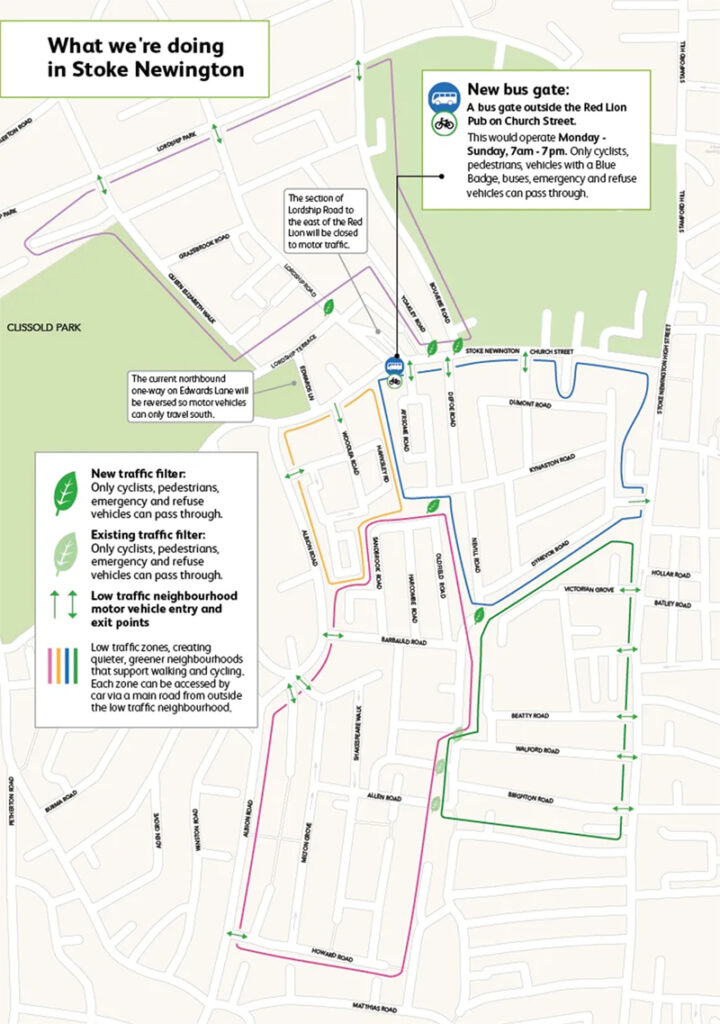 I visited because there are many similarities between Church Street and Cambridge’s Mill Road. Each street presents a mix of independent retail businesses together with housing and has (had) a bus gate placed roughly centrally. In Stoke Newington LTNs were simultaneously introduced on surrounding streets, whereas in Cambridge no other changes were made, although some measures are already present in many connecting streets. The relevant lengths of roadway are different in that Mill Road from Donkey Common to Coleridge Road is approximately 1,325m where Church Street is about 725m from Albion Road to the High Street. Apart from some minor works around the insertion of side-street filters in Stoke Newington, in neither case has the streetscape been upgraded to take advantage of the possibilities raised by reduced traffic.

In Stoke Newington a convenient narrowing of the road has been used for placing the bus gate. On each side of this small section (c.75m) the road is much wider. The only vehicles allowed through the restricted section are buses, emergency vehicles, council refuse collection vehicles and vehicles registered by Blue Badge holders. One registration is sufficient for a Blue Badge holder’s own vehicle but other vehicles carrying that person (e.g. taxis, carer’s vehicles) must be registered the day before travel. A Blue Badge holder can only have one vehicle registered to them at a time.

Although I spent less than two hours in Church Street (during the middle of the day on a weekday) I took the opportunity to speak to a number of traders and several members of the public.

The people walking in the street that I spoke to were all in favour of the traffic scheme. All were local residents, most were non-car owners and whilst the car owners admitted to a certain amount of frustration caused by the restrictions to some of the journeys that they made, they were still in favour of the scheme overall. When I mentioned that one of the traders had spoken of loss of business of around 25%, I was told that his use of numbers could not be relied upon!

I spoke to the owner of a café who was in favour of the scheme. She owns a car in order to make a weekly trip to bring in supplies, and this now takes about 45 minutes longer than before. ‘When the bus gate first went in it was such a change – like living in the countryside! In the summer I’ll see if I can get some tables outside.’ People who deliver to her do find the closure frustrating but there is no sign yet of anyone refusing to deliver. One of her suppliers has a key and delivers overnight but she would not be prepared to give out keys to her premises to anyone else.

An optician spoke to me about mileage reductions in their deliveries. ‘Our courier used to do two collections and two deliveries a day but now they do it all in one visit. It’s OK, we can organise ourselves round that.’ They also noticed that some of their more infirm customers who drive to them have stopped coming, blaming of the loss of parking through the insertion of street closures.

An off-licence owner reported no problems or loss of business. He personally likes the lack of traffic noise and smells. ‘Delivery drivers complain about it a bit but they’re always grumbling about something!’

The owner of a cycle shop that I spoke to was, not surprisingly, in favour of the change! “We’ve serviced a number of old bikes and sold some new ones. People are adapting to the change – even though they’re not always very happy about it! Closures in the streets round-about make it better for cycling too.”

I also spoke to a general grocer who was most unhappy with the new arrangement. He is a Cypriot trader supplying a number of specialist lines to members of his community as well as serving the local residents. He spoke of a loss of business of up to 25% (see above) and considerable inconvenience in commuting between this shop and the other branch of his business, with the driving time increasing from 10 minutes to over 30. He spoke of having to consolidate orders from regular suppliers to reduce the number of deliveries that they were prepared to make, the dangers of large vehicles having to turn in the street and the loss of business from customers who previously travelled to visit him. He claimed that the council was turning a deaf ear to his complaints.

The grocer walked me along the street to a minicab office where, after I was introduced in Turkish, I heard about how most of their journeys were taking an extra 20 minutes with a consequent increase in price. The difficulties of elderly and disabled people having to register a vehicle to go through the bus gate were described, but the major complaint was that whilst an exemption for their vehicles had been promised, it was not yet forthcoming. I should have asked if black cabs were allowed through but I didn’t see any, so I assume not.

I was also told by these gentlemen that an undertaker who operates in Church Street has great difficulties with the bus gate, and a car repair garage operating in a side-street (Defoe Road) has also lost a lot of business, but I was out of time and was not able to speak to them myself.

1) Delivery times. The Church Street bus gate operates from 7am to 7pm, but to receive deliveries before 7am is not practical for the vast majority of businesses, so this ‘down-time’ is not really relevant.
2) The great majority of businesses – and residents – will be able to adapt to a new situation. A very few will need special help. The council seems to be turning a deaf ear to a number who complain, rather than making the changes that are within their power.
3) Suppliers to small businesses are often running long delivery routes and cannot afford each delivery to take too much time. Extensive diversions on crowded streets will result in suppliers ‘rationalising’ their operations to the cost of the smaller businesses who rely on them (see side box).
4) Large delivery vehicles need space to avoid a bus gate and the streetscape must cater for this with turning routes in side-streets or the provision of turning circles in the road. The signed turning/escape routes are helpful.
5) To reduce the traffic is only part of the job. A stretch of empty tarmac is an invitation to speeding and a missed opportunity for traders to use the space and for the public to enjoy an enhanced environment. A large proportion of the street is landscaped as the territory of motor vehicle traffic – the eastern section of Church Street in particular has very wide sections, sufficient for three or even four traffic lanes in places. Even though traffic is much reduced, one is still careful before stepping off the pavement. Unless territory is reclaimed from the space set aside for motor vehicles with hard landscaping, it is still ‘road’ and not a safe place for other than ‘traffic’.

Understanding of delivery issues for small business is important in getting to grips with traffic management on shopping streets. A particular issue with Mill Road is that the selection of specialist eateries/groceries relies on a wide range of specialist suppliers. Some of these are based a long way from Cambridge and cannot possibly arrange to hit a delivery time for a customer with a relatively small order. Some also deliver on a system of extended trips taking a large vehicle for a long series of small deliveries over 48 hours or more. This means that the ‘uniqueness’ of Mill Road relies on being able to receive deliveries from all sorts of vehicles at all times of the day. The other end of the scale will also be local suppliers delivering in their cars. Without these unique ingredients, the signature dishes on which their businesses rely cannot be produced. It matters.

I speak from personal experience as I used to be the proprieter of Cobs Bakery, operating from Nuffield Road and delivering daily to businesses on Mill Road. The whole-foods supplier that I used is based in Leeds. They come to Cambridge fortnightly and deliver to Mill Road, university kitchens and a number of other wholesale and retail outlets. Regular drivers would make me their first drop at 5am, but those unfamiliar with the route would aim for the city centre first and do other drops later, expanding my normal 13-hour working day to 18 hours. Also, after a local company folded, I had to go for my yeast and specialist bakery supplies to a national supplier, who pass through Cambridge twice a week from Wembley. As a small business, I had to take my delivery whenever it was convenient to them, and traffic conditions could vary their arrival time by as much as 4 hours. Sometimes it was very inconvenient! The small businesses on Mill Road will have similar issues to deal with.