Clare Rogers lives in London and began calling for more liveable streets in Enfield when the borough received ‘Mini Holland’ funding. She is now the Healthy Streets Campaigner at London Cycling Campaign. She talked to us at Camcycle’s monthly meeting in December 2021, about how she works to achieve community engagement and unity while campaigning for change.

I haven’t always been a cycling or healthy streets campaigner. I used to drive everywhere, especially after I became a mum, but about seven years ago I began to wake up to the problems of motor traffic dominating our streets. Road deaths, which average five per day in the UK, must be a terrible way to lose a loved one. There is the pollution and the fact that road transport is the worst sector for UK emissions contributing to climate change, but the loss of children’s freedom over the last four generations is also tragic: a driver’s right to a shortcut trumps a child’s right to play in the street near where they live. This has led to terrible physical inactivity, which is a huge killer, with the exercise of movement stripped from our streets.

The loss of children’s freedom over the last four generations is tragic: a driver’s right to a shortcut trumps a child’s right to play in the street where they live

At the point when I was realising all this, the Mayor of London awarded Enfield £30 million for a Mini-Holland scheme. (Part of the London Mayor’s Healthy Streets Approach, aimed specifically at outer London boroughs where residents are more car-dependent than inner London, it aims to make these boroughs as cycle-friendly as their Dutch equivalents where more than 50% of journeys are made by cycle in some cities.) The residents of the borough went bananas in opposition to plans for cycle lanes and town centre improvements. I’d just ditched the car in favour of a tandem for the school run and thought I should get involved. I joined Enfield Cycling Campaign and I want to share some of the things I’ve learned on my journey as a campaigner, about growing grassroots support for walking, cycling and better streets and about persuading decision-makers.

It’s not about the bike

The first thing is that it’s not a cycling conversation, it’s a people conversation: there’s a lot of opposition to bike lanes but in Enfield we turned the conversation to ‘people-friendly streets versus traffic-dominated streets’. Nobody benefits from traffic domination but so many of us start off blind to the extent of car domination and its effects. Since 2009, when navigation apps like Google Maps became standard on mobile phones, traffic on residential roads has rocketed and we’ve been like frogs in warming water – it started gently but has crept up on us and we haven’t realised until the effects have become so bad. It’s not about cycling, it’s about subduing traffic and cycling campaigners teamed up with others who supported the Mini-Holland, including parents, play street organisers, people who wanted better High Streets and people with an environmental interest. We established a Facebook group, ‘Better Streets for Enfield’. We made the point that this is for everyone, not just those who currently cycle – although we’ve been surprised that many who were initially promoting pedestrian rights started to cycle when the traffic levels dropped! 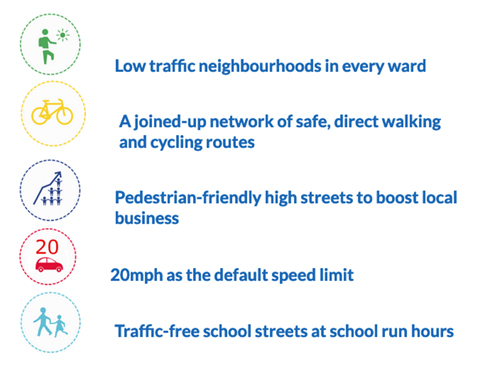 The Better Streets group coalesced around five ‘asks’ (see picture). Since then I’ve been involved in setting up Westminster Healthy Streets and Better Streets for Kensington and Chelsea, with similar sets of asks and a vision for less traffic, cleaner air and safer active travel for everyone. The groups aren’t associated with London Cycling Campaign but they’re independent allies, and in areas hostile to cycling it’s helpful to broaden out the conversation.

We’ve found that it’s really important to bring lots of different interest groups on board. Better Streets 4KC (for Kensington and Chelsea) gathered support from 70 local organisations, which was a great thing when the council was saying ‘People don’t want these bike lanes’. Growing coalitions like this moves the conversation away from bike lanes to cleaner, safer streets.

Alongside building coalitions with existing interest groups, education is important. Lots of people don’t know about low traffic neighbourhoods, school streets or protected cycle lanes, so we take people on tours of Waltham Forest and look for the latent street champions out there to encourage their neighbours. We organise ‘Try-a-Bike’ community events where people can try riding a cargo bike, an e-bike, a bike with a child trailer so that people who are new to cycling can see what options are available. There are also some wonderful community groups working with women and different ethnic communities, getting people learning to ride and doing social rides.

Opposition to cycling can be your friend. Anti-cycling posters galvanised support for Enfield’s Mini-Holland, but it’s important to make safe spaces for discussion and support away from the anger which sometimes characterises opposition. It is so important that campaign groups are welcoming, both in person and online. We have found that there is no point in arguing. Some people will never support change so we just point to the facts (more for the sake of others watching on social media) and leave it at that. It is very valuable to be able to direct people to a resources page for unbiased factual analysis of traffic schemes.

We concentrate on doing the nice things – celebrating the good like the enjoyment of play streets and encouraging ‘wobbly bikers’ – inexperienced cyclists venturing out on newly-calmed streets. We did a breakfast for the workers who installed our local traffic filters to celebrate the event, to thank the people and show that there is grass-roots support from local mums.

When consultations are approaching we have found that, even though it does take a huge amount of time, door knocking to encourage people to be involved is a game-changer. Support for the schemes is often in a majority but in the face of noisy opposition, people think they are on their own – or don’t even know that a consultation is going on. Just telling people that they can get involved and that they can make a difference is very effective. 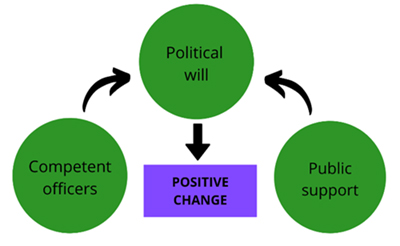 As well as the public, we also need to deal with the councils: the decision-makers, and we dream of a holy trinity of bold political leaders, competent officers and a supportive public. Although that may be the stuff of dreams, remember that councillors are human and it’s worth building relationships with them and also with the council officers. Don’t be shouty, don’t be personal and don’t make perfect the enemy of the good because people are generally trying hard to do the best they can. Public messaging needs to be as positive as possible. Amazing things can come from taking your councillors on a bike ride! Councils can be held to account – we use a map of promises and ask for pledges at election time – but also remember to say thank you.

We find that working with allied groups takes time and personal engagement to build trust and understanding. Once there is that relationship we find that we can build a list of joint asks for our neighbourhoods and all contribute from our strengths in campaigning to improve our streets.

And, finally, don’t forget the dream! Many of us can live great lives without owning a car. We long for streets with a sense of community and where children can play. We can make it happen!