Last year my daughter decided she’d like to give football a go, so on Saturday morning we joined a long queue of parents and children snaking across the playing fields at North Cambridge Academy. When we reached the front, we found coach Kinnerz sitting behind a Christiania cargo bike, using it as a reception desk to enrol new players and take the register. 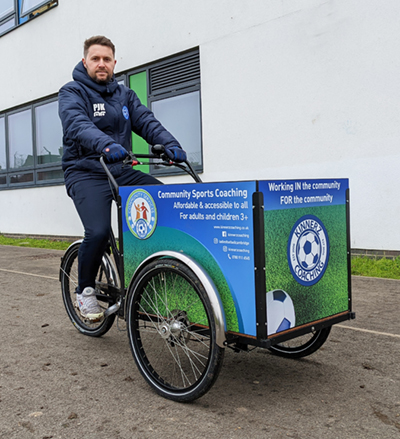 Phil ‘Kinnerz’ Kinsey runs Kinnerz Coaching, a family-focused and community-oriented business established in Cambridge 16 years ago. Kinnerz Coaching provides sports coaching for children (aged 3 upwards) and adults that is affordable and accessible to all. He operates seven days a week, offering lunchtime and after-school clubs, community football sessions, a weekend grassroots football academy, club football coaching, 1-1 football training and sports birthday parties, alongside running mens’ and women’s football teams. All sessions are conducted with the ethos ‘if you had fun, you won’. The Saturday morning football academy is immensely popular, with 126 children registered to play this term.

Kinnerz has been using his three-wheeled Christiania cargo bike for about two and a half years. He says that the bike is multi-purpose and therefore helps his business in different ways. As well as acting as a mobile reception desk (the three-wheeled design means that the bike is upright and stable when stationary), the large, sturdy box at the front of the bike carries the equipment required for training sessions and birthday parties, such as footballs, football goals, bibs and boxes of all shapes and sizes. He also uses the cargo bike to transport a drinks machine on hot days and thinks he might try operating it as an ice cream stall on special occasions. Kinnerz also appreciates the fact that the cargo box takes the strain off his back: he used to carry equipment in a big rucksack on a standard bike.

The customised box on the front of the cargo bike is a big plus for Kinnerz as the colours and logo on the bespoke panels are eye-catching and the text describes clearly what the business is all about. ‘People certainly take note [of the cargo bike]’ he says. ‘With the branding on the side, the information and the colours it does stand out, so you do see people looking… More often than not you see people smiling really.. It’s a bit different from the norm.’

The cargo bike fits with Kinnerz Coaching’s green policy and many of his coaches also travel to work by bike. He thinks that the cargo bike isn’t just better for the environment than a car or a van: there are more benefits. He says it’s a lot easier and quicker to get around Cambridge by bike and he’ll often beat a car to a venue. He also thinks that cycling is a good form of exercise and great for physical fitness. It’s important for a sports coach to promote physical activity, so Kinnerz acts as a role model by cycling everywhere for work by cargo bike or regular bike.