I first met Mike while out on my Elephant Bike delivering magazines last summer. He was delivering bread in the streets near his Richmond Road bakery and we stopped to chat – I love a good cargo bike! I dropped by the bakery the other day and got the full story. 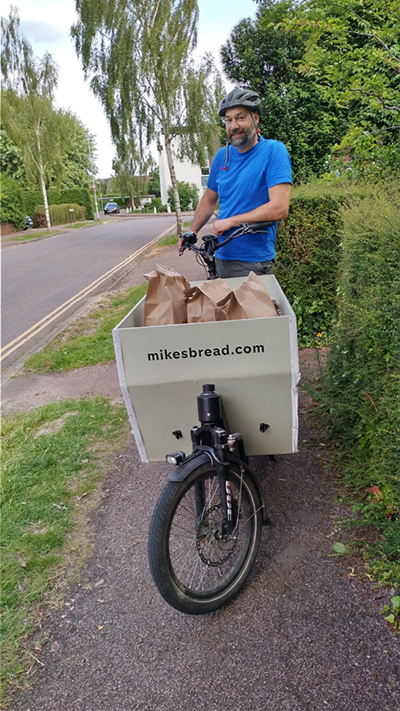 Mike started baking at home in Oregon when his English wife complained about the standard of American bread. He picked up the practices of West Coast American sourdough baking first-hand from masters of the art. After a move to the UK Mike started baking again for friends and word of mouth (and neighbourhood WhatsApp groups) soon increased his circle of customers. Deliveries started to be a problem. From having to carry everything down a narrow passageway to his car, to difficulties finding the right order amongst the packages distributed around the vehicle and problems parking in residential streets already choked with parked cars, Mike realised there had to be a better way. Lockdown saw his order book exploding and thinking about a cargo bike evolved into an urgent investigation.

Initially, Mike hired a Bakfiets from the School Run Centre. The advantages were immediately clear: the bike could go down the narrow passage and load at the bakery door, there were no parking problems out on the round and orders were to hand for delivery in an accessible load area. But the volume of orders he was handling meant that the bike was on its load limits and something more meaty was an urgent requirement. Suitable bikes weren’t in stock locally and, thanks to pandemic restrictions, lead times for delivery were extending into the too-distant future, but Mike managed to find an Urban Arrow bike for sale in the West Country. One custom-built box later and the Mike’s Bread cargo bike delivery system was launched!

The loading, order sorting and parking benefits of using a cargo-bike were already established. The Urban Arrow with its custom box takes 40 orders (that’s around 60-80kg) twice a week, and a neat paint job makes it an eye-catching mobile billboard for the business. Being on a bike rather than in a vehicle makes Mike much more accessible whilst he’s out on his rounds: ‘I can see people looking and wanting to say something, and on the bike I can stop to talk. Conversations like that have brought me several customers! I’ve also had conversations with other tradesmen including plumbers and tree surgeons: they’ve seen the bike and realized that they could use one for their business’. It’s economical too: ‘I can do a delivery run on half a charge of the battery, which costs pennies overnight. It beats filling up with diesel! And some of my customers have said they really like being able to return to supporting a real local business’.

Mike delivers all over the city, from Girton to Trumpington, and the bike’s motor and 80kg capacity come into their own. ‘I can use the cycle paths and I hardly see the traffic, although I’m beginning to see numbers of the food delivery motorcycles which is a bit naughty. The paths are clearly built with ordinary bikes in mind so the long wheelbase of my cargo bike (and heavy weight) makes some of the chicanes tricky. I have several deliveries around Mill Road and the traffic is back and bad-tempered along there. I can understand it – I drive myself and traffic isn’t good in Cambridge, I get frustrated sitting in queues, and some cyclists are crazy. The law is there to keep us all safe but some of the things you see . . !’ On the nights when Mike’s son Max rides his bike to help with deliveries – running to the doorsteps while Dad stays with the bike – they return together for a well-earned home-made sourdough pizza. What a perk! 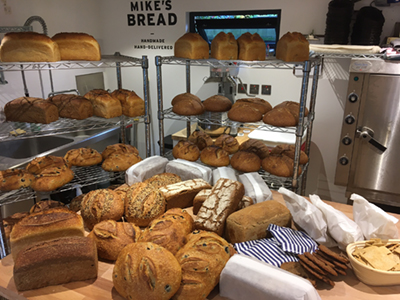 Mike bakes a range of sourdough breads in a self-built bakery at the bottom of his garden. He uses organic flours and is sourcing speciality ingredients to expand his product range. He’s not Cambridge’s only micro-bakery, but there’s room for him alongside the others. You can find him on Facebook and at mikesbread.com. I’m thinking about putting in an order just to see the delivery operation in action!