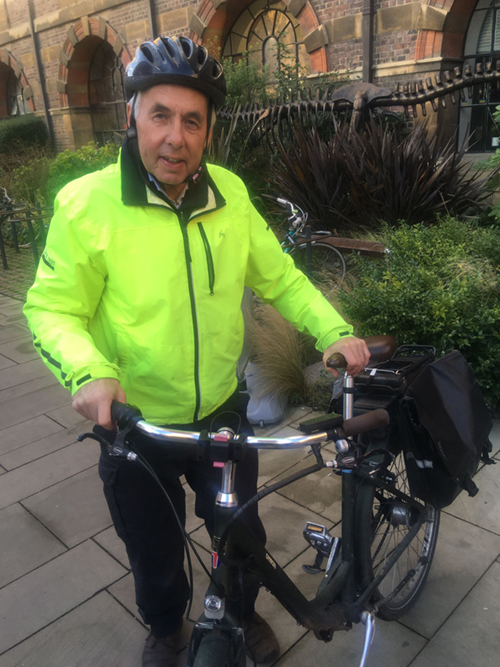 It’s March 2020 and I’m in Outspoken Cycles, parting with £1,200 in exchange for a new electric bike. This is the first new bicycle that I’ve ever bought in about 65 years of cycling; all my previous fifteen or so bikes have been cast-offs or were bought second-hand for less than £100, then affectionately refurbished and maintained. My seemingly extravagant purchase was provoked by a combination of older age and some impaired mobility due to spinal cord damage. So what sort of challenges do I face, and did the e-bike help to address them?

Any older cyclist finds that muscle power starts to decline and that balance gets less intuitive and needs more concentration. Decreasing power means that your natural cycling speed reduces and the distances that you comfortably tackle decrease. Hills become more challenging; not just Castle Hill but the ramps to the river and railway bridges too, even using low gears. Lower speeds and acceleration mean that the larger and faster roundabouts seem more hazardous than they used to.

Balance issues are more evident at lower speeds and in tight situations. Mounting and dismounting need more care, as does getting underway from a standing start at junctions, traffic lights and in queues. Assorted bollards, barriers and chicanes require good balance at low speed, and sometimes require an inconvenient dismount.

My e-bike has proved a good solution to both power and balance issues. I use it for an exercise ride nearly every morning – nine miles beside the Busway to Oakington and back

My e-bike – an Omega Batribike – has proved a good solution to both power and balance issues. It has a step-through frame, so it’s easy to start off either from astride the bike or by scooting the bike and swinging the free leg through. A seven-speed hub gear makes it easy to select a low gear for getting underway, and either of the lowest two of five motor power settings helps with the first few turns on the cranks that are needed for balance. This extra power boost is especially welcome in exposed situations, such as in an advance stop box backed by impatient engine-revving traffic. Once underway, the 250W motor in the front hub is equal to all my demands. To get the exercise benefits, I try to stick to power levels one or two, but the extra levels are reassuring for a steep hill, a strong headwind or with two large panniers filled with food shopping.

As well as using the e-bike for commuting the two miles into the city centre and for local errands, I also use it for an exercise ride nearly every morning. My normal route is nine miles from home in East Chesterton, beside the Busway out to Oakington and back. The sceptic might question why I don’t use a regular bike to get maximum exercise value. The answer is that just the lowest level of power assistance takes enough strain off the ageing muscles to prevent an aching back, whilst still allowing me to keep a good cadence at an enjoyable speed. The effort is certainly enough to exercise the heart and lungs and to work up a sweat. And I might just ease into level 2 power when heading back into a strong south-easterly wind. With these out-of-town rides in mind, I’ve invested in Marathon Plus puncture-resistant tyres, as mending punctures is a bit more trouble on a bike with both hub gears and a hub motor.

What other disadvantages does an e-bike have? The extra weight of the motor and battery does make the bike more difficult to manoeuvre when walking or parking. Having been used to frames with a cross bar, I’ve found the difficulty of leaning and locking a step-through frame against a lamp-post frustrating. It also takes me longer to lock my expensive bike to a rack, as I’m cautious enough to use both a D-lock and a strong chain. Battery life has not proved an issue with my relatively low power demands: two or three charges each week are sufficient.

Mention of charging prompts other concerns about my e-bike, such as its environmental impact. E-bikes are rightly regarded as part of the mix in a low-carbon transport future. However, they still need charging and that electricity may have been generated at a gas-fired power station or worse. I have a roof-full of solar panels, so try to charge my e-bike when the sun is shining. On dull days, my electricity comes from EDF with its high proportion of nuclear generation; that’s low-carbon energy but needing a problematic waste disposal programme that the UK has yet to put in place.

I’m also concerned about the resource demands of the batteries for all e-vehicles. The lithium, nickel and cobalt in my battery have all been mined with substantial environmental and social impact (albeit less than for a car battery) and the hugely increased demands of the ongoing energy transition are going to amplify these impacts to an extent that society has yet to appreciate. When my battery needs replacing, it is unclear whether it will be recycled. At present only 5% of lithium-ion batteries are recycled, although rapidly increasing raw lithium prices will encourage more recycling and better design of battery recyclability.

Carbon check: How green is an e-bike?

The European Cyclists’ Federation estimates that e-bikes have a higher average manufacturing carbon footprint than conventional bikes, at 134kg CO2e compared to 96kg. However, despite the added emissions from electricity production and battery manufacturing, e-bikes actually have lower greenhouse gas emissions over their lifetime than conventional bikes, because they require less food production per kilometre travelled. BikeRadar calculated that cycling has a carbon footprint of about 21g of CO2 per kilometre travelled (less than walking or getting the bus and less than a tenth the emissions of driving), whereas for an e-bike the footprint is just 14.8g CO2e per kilometre.

They add that if cycling’s popularity in Britain increased six-fold (equivalent to returning to 1940s levels) and all this pedalling replaced driving, it could make a net reduction of 7.7-million tons of CO2 annually, equivalent to 6% of the UK’s transport emissions.

If I get too apologetic, however, I remind myself that some of the journeys I do would otherwise have been done by car or bus. The e-bike also keeps me healthier and more independent than I would have been otherwise, and less of a burden on family and the NHS. On balance, then, I’m glad that I took the decision nearly two years ago to buy an e-bike.

What do older cyclists need?

Nigel compiled a list of some of the infrastructure that he finds helpful as he cycles in and around Cambridge. Do you agree? What else should be on the list?