Changes to the Highway Code, made law in January, recognise the importance of people riding bikes, walking, or riding horses on our roads and streets. Camcycle, together with national active travel organisations, welcomes the Department for Transport’s changes. This update will improve safety for everyone. Families with children, older adults and disabled people will all benefit. The new code reminds road users that they have a duty to take extra care around other people, and the heavier your vehicle the more responsibility you bear.

This new ‘Hierarchy of Road Users’ then feeds into three main rules: for all road users, for all using wheeled modes of transport and for all using motorised vehicles. There is a handful of new rules and some alterations to existing ones which should increase safety for people cycling and walking. Note that the new rules are not mandatory in the legal sense, but non-compliance may be considered a contributory factor in convictions under the Road Traffic Act (see box below).

The Hierarchy of Road Users sets out that those who can do the greatest harm have the greatest responsibility to reduce the danger or threat they may pose to other road users. This is one of the most important aspects being introduced and reflects government and industry concern for the safety, convenience and comfort of the most vulnerable road users. The philosophy also fits in with current initiatives in the wider health and safety industry. Many of the other proposed changes to the Highway Code reflect this principle of road user hierarchy.

Rule H2: (for drivers, motorcyclists, horse-drawn vehicles, horse riders and cyclists) – give way to pedestrians at junctions. This rule lays out the places where pedestrians have priority and where all other road users must give way to them. ‘Pedestrians have priority when on a zebra crossing, on a parallel crossing or at light-controlled crossings when they have a green signal.’ The significant new part of this rule is that pedestrians also have priority when they are about to cross: drivers and cyclists should give way to them. It is no longer necessary for people walking to first step into the road to be rightfully given priority at side roads or zebra crossings.

Rule H3: (for drivers and motorcyclists) – give way to cyclists. Drivers should not cut across cyclists when turning into or out of a junction or cut across their path ‘whether they are using a cycle lane, a cycle track, or riding ahead on the road’. They should stop and wait for a safe gap in the flow of cyclists if necessary.

In summary, for both Rule H2 and H3, ‘people who are changing direction should give way to people who are going straight’. Most drivers intuitively understand that concept when interacting with other drivers, and now they will be expected to give the same consideration to cyclists and pedestrians. This brings the UK into line with road rules in peer countries.

Whilst some continental European countries have civil laws of ‘presumed liability’ for collisions, there is no such presumption in UK law. Where it exists, presumed liability means that in a collision between a car driver and a cyclist, for example, liability for damages resulting from the crash rests by default with the car driver (the more ‘threatening’ road user), unless they can prove otherwise.
In collision litigation case law, UK judges have formed an opinion that road users should have regard for their own and other road users’ safety. What the new highway code rule H1 introduces is a ‘moral’ responsibility within the road user hierarchy, weighted towards those who have ‘the potential to cause most harm’. As the Highway Code is also a best practice guide, it will be interesting to see whether court judgements on collision responsibility change over coming years.

Many Highway Code changes are clarifications to ambiguous or frequently misunderstood rules. In the past, many drivers failed to understand why people cycle side-by-side or take positions in the centre of the lane; the new Highway Code explains why and when it is safer to cycle this way.

Rule 63: Cyclists should ride responsibly near pedestrians and horse riders. Relative to pedestrians, bicycles can move at a much greater speed and cause harm in a collision. In particular, people who are distracted, hard of hearing or with limited sight can be startled. Riders are reminded to give pedestrians space and give an audible warning when necessary. 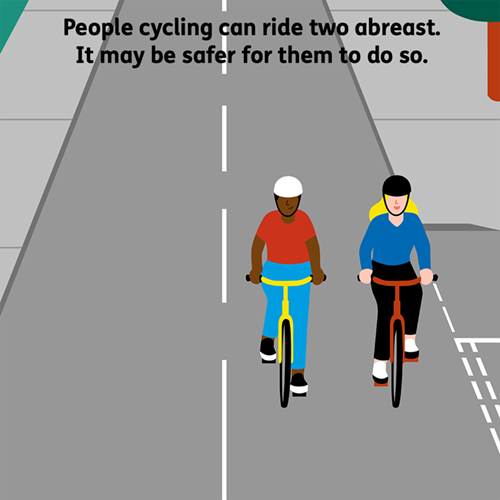 Rule 66: Riding together. People cycling ‘can ride two abreast and it can be safer to do so, particularly in larger groups or when accompanying children or less experienced riders’.

Rule 72: Road positioning for cyclists. Replacing previous advice to ride ‘in the gutter’, cyclists are now advised to make themselves as visible as possible. On slower speed roads this means riding in the centre of the lane. The rule suggests moving to the side when a faster vehicle comes up behind. However, the practicality of doing this is not straightforward and leeway is given when it would not be safe to let the vehicle pass.

Rules 73, 75 and 76: Junctions for people cycling. These rules clarify the way to use junctions where cyclists have independent traffic lights. Two-stage junctions use these traffic lights to direct cyclists across more complex junctions in stages. Finally, rule 76 reiterates that cyclists should be treated the same as motor vehicles, and have priority over any road user turning across their path.

Many Highway Code changes are clarifications to ambiguous or frequently misunderstood rules. In the past, many drivers failed to understand why people cycle side-by-side or take positions in the centre of the lane; the new Highway Code explains why and when it is safer to cycle this way.

Rule 163: Large vehicles must give a minimum 1.5m passing distance to more vulnerable users such as cyclists and horse-riders in all conditions. Drivers should leave at least 1.5m when overtaking cyclists at speeds of up to 30mph. The distance should be greater at higher speeds.

Rule 239: Safe exiting, sometimes called the ‘Dutch Reach’. Vehicle drivers and passengers should open their door using the hand ‘on the opposite side’ from the door they are opening. For example, using the left hand to open a door on the right-hand side. Doing this naturally turns your body, which makes it easier to look over your shoulder and see other road users, thereby reducing the likelihood of injury to cyclists passing on the road, or people walking on the pavement. Remember: people who open a car door and cause a crash have always been liable for damages they may cause. So this advice may save vehicle users a lot of money and someone else a lot of pain.

The introduction of the new rules goes some way to improve our road and street spaces for people who choose to walk, cycle or ride. However, their success is dependent on drivers, of all vehicles, knowing about them and following them. It is really important that the message is disseminated widely, and repeated as people do not routinely consult the Highway Code. Those who drive motor vehicles need to understand the implications of their actions and their responsibilities while driving. They also need to know that, when they opt for a car-free journey, they should be able to expect greater safety, convenience and comfort.

Read more at gov.uk/dft/highway-code-changes. The Department for Transport also include a full table of the changes on their website.