When Colin McGerty’s e-bike was stolen, it wasn’t the police that helped him recover it, but the Bluetooth tracker he’d forgotten he’d installed. 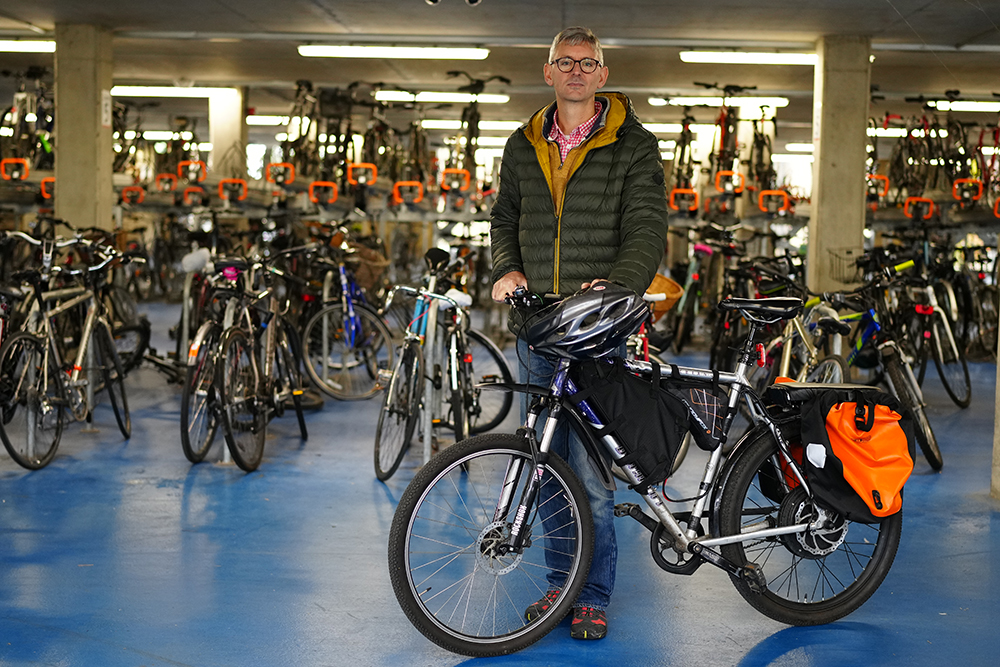 Having your bike stolen is deeply upsetting. The financial cost is one thing, but the feeling of invasion and the loss of control are equally distressing. Until recently, I’d been careful and – I assume – lucky.

That ended when I made the same error as many others, thinking that the CCTV and security presence at Cambridge station CyclePoint are in any way useful. In truth, CyclePoint has become utterly unfit for purpose: a place where thieves appear to operate with impunity. Thefts occur daily, often multiple times per day. It may appear to be the best place to leave your bike but in fact it is currently the worst. Voi e-scooters are the alternative I’ll be using to get to the station in future.

CyclePoint has become utterly unfit for purpose: a place where thieves appear to operate with impunity. Thefts occur daily, often multiple times per day. It may appear to be the best place to leave your bike but in fact it is currently the worst

Some time after 4pm, my bike was taken from a prominent position. It was locked with the same good-quality chain and padlock that served me well for years. But it was twisted around the frame, perhaps with a crowbar, in a game of ‘who will break first’ against the crossbar. Presumably the thief didn’t really care if the frame lost; they’d just move on to the next one. I returned about midnight to find it missing.

I called police 101 straight away but after staying on hold for a while concluded that delaying reporting it until the following morning would make little difference.

In the morning I used cambs.police.uk to report the crime online. Within a few minutes I had an email with a reference number. I also reported the theft on the Stolen Bikes in Cambridge Facebook page, BikeRegister.com and on Twitter. Thanks to Camcycle and many others who retweeted.

It was only then that it struck me: I have a Tile tracker on that bike – a Bluetooth device which is attached to the bike and can be detected using a related app on my phone. I opened the app; the tracker wasn’t in range so I marked it as lost. One of the optional features of this tracking device is 30 days of location history. When I checked this, I could see where the bike had been after the theft had taken place. I went to those first few locations and walked around a bit. The device wasn’t in range so I went home and waited.

At around lunchtime I received a follow-up email from the police requesting more information, which at this point I was very keen to provide. They offered to have CyclePoint review their CCTV if I provided the times when the bike was left and discovered stolen along with its exact location etc. However, after I provided this information I quickly received another email stating that since the window of time I’d provided was greater than one hour, CyclePoint would automatically refuse the request and that my case was consequently closed. This was despite my stating that the tracker was working and providing a screenshot of the app, albeit without a current location.

While one can understand that CCTV searches might need some sort of cap given how many requests they must receive, for the police to close the case and ignore the presence of the tracker was really frustrating. It also became a problem later on.

There was no more tracker activity that day but the following morning I woke to find a notification saying that my device had been found six times in one night at different locations around the city. (This particular brand of tracker is used by enough people in Cambridge to register multiple hits, even if not in range of my phone.) I duly went to each of the locations but the tracker wasn’t in range. I marked it lost again so that I’d get a notification when it was next located. I just had to hope that the thief wouldn’t discover the hidden tracker in the meantime.

Later that evening, the tracker was reported again so I went to the new location and bingo: ‘Your Bike is Nearby Now’. Annoyingly, the app will only show a signal strength indicator to help guide you to the exact location while you play a sound on the tracker. Not being sure which house it was in and not wanting to tip off the thief, I went home to consider my options.

Helpfully, the Location History in the tracker app shows a single time stamp to indicate one hit at a location. But a range of times for a single location indicates multiple hits over a period of time, meaning that the tracker is stationary. You may get lots of hits while the tracker is moving around but it is more helpful if you can see it is stationary.

The following morning I went back to the same location and got the same result: it was still there. In the daylight, I could actually see the bike, semi-hidden next to a hedge in the front garden and locked to another bike. What to do? Knock on a stranger’s door and demand they return it? No thanks. So I phoned police 101 and waited on hold for about half an hour. When I got through I explained that I knew exactly where my bike was and asked if they could retrieve it. I was told that the case was closed and that I’d need to be transferred to the Investigations Team and ask them to reopen the case as I had new information. The Investigations Team are working remotely so I’d need to leave a message and wait for a call back. This wasn’t promising but I left the message.

Feeling let down by the police and worried the bike would be gone again by the time anything happened, I contacted the folks at the Stolen Bikes in Cambridge Facebook group to see if they could help. Amazingly they were willing to knock on that door with me, film the whole thing and recover the bike.

There was no answer when we knocked so my heroic helper got out some massive bolt croppers and released my bike. As we left, the homeowner came out and shouted at us in the street. They were extremely upset that we would do such a thing: it seems the irony was entirely lost on them. Seriously though, it was really unpleasant and I’m not recommending you take such action.

Later that day the Investigations Team did phone back but I explained that I’d recovered it and the issue was resolved except for the battery being missing and damage to the frame. I doubt they will now follow it up. Maybe if I’d left it with them they might have made an arrest, in which case I owe the bike owners of Cambridge an apology.

The Stolen Bikes in Cambridge Facebook group is a fantastic community of people reporting missing bikes, sharing information, providing advice and keeping an eye out for each other. I highly recommend joining as the bigger its reach, the more we can help each other.

I wish I could end by recommending you leave the policing to the police but I can’t. They were in far too much of a rush to close this case and, despite the Investigations Team being willing to accept an active tracker location as actionable evidence, they were very difficult to contact and introduced delay which could have resulted in the complete loss of or even more damage to my bike.

But I can wholeheartedly recommend trackers. Get one for your partner this Christmas and ask them to get you one! Some, for example the tiny Tile Sticker tracker, are small enough to get right inside frame tubes or be really well hidden and some have greater range. Either is infinitely better than nothing.

What to do if your cycle is stolen

Find more information about protecting your cycle from theft at camcycle.org.uk/cycletheft