Hugh Salt is a game-changer who brought the first Dutch-style bikes into the UK and kickstarted a cargo bike revolution. The School Run Centre owner is looking forward to retirement, but finding his replacement isn’t going to be easy. Rosie Humphrey caught up with him to find out where it all began and what is needed to support businesses like his. 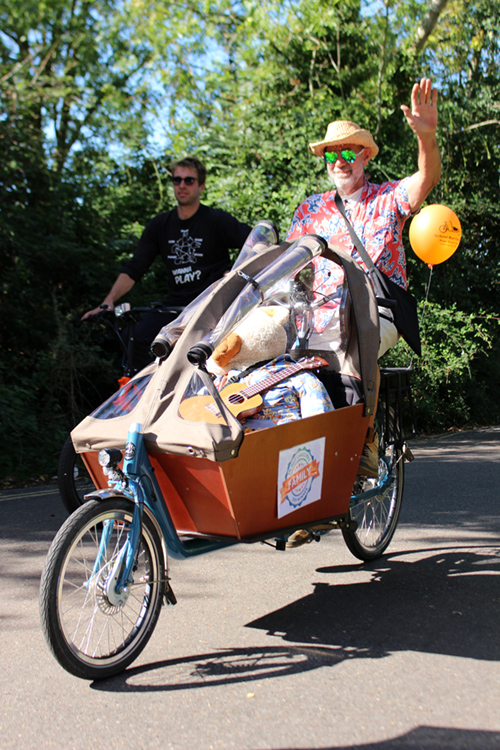 It all started in the late 1990s when Hugh was living in Amsterdam and regularly flying home to Cambridge with his children. On each occasion, someone would ask him to bring back a Dutch bike – which he did, largely as a favour, before a large Dutch manufacturer which was auctioning off their stock led him to import 600 bikes. Among them was a bike with a box on the front which was quickly sold to a business. He started sourcing bikes from Azor – a Dutch manufacturer which makes solid, traditional, Dutch models. Then in its infancy, Azor was looking for an importer to Britain and Hugh jumped at the chance, selling the bikes online and shipping them to the UK.

Down the road from Hugh, in the cellar of an Amsterdam bike shop, Martin Van Andel was busy working on a new cargo design. Martin didn’t drive, didn’t like using the tram and had a third child on the way. His needs led to him designing the Bakfiets long model which now abounds in Cambridge. Within a few weeks, Martin had orders from friends and fairly quickly, and with more orders than he could manage, he began outsourcing the manufacturing to Azor. Seeing the utility of the Bakfiets, Hugh began importing them to Cambridge. ‘I loved them. With kids of his own, Martin was perfectly placed to design the bikes. And he was an eco-warrior – someone wanting a good quality, safe and sustainable product. It was so easy to ship the bikes to Cambridge, and I knew people would appreciate them.’

When Hugh started showcasing the bikes here in 2002, people weren’t immediately convinced, but the bikes began selling themselves. ‘It took a while. I teamed up with Cambridge Cycling Campaign [as we were then] to run events around the city and eventually people started going for it. People saw the utility and quality of the bikes. There are a lot of very conscientious parents and the bikes fit with family life and thoughts about looking after the planet. I think now we’re numbering around 800 cycles in the local area.’

He’s right, of course. The bikes really meet a need. When you’re the parent of school-aged children, the big thing in your life on weekday mornings is the school run. Cambridge traffic can be heavy and journey times unpredictable. Cycle-commuting is an obvious way to improve the school run time-economy: you know that on a bike, you’ll drop off the children on time and be able to get to work punctually, too. And according to Hugh, the bikes really do last: ‘I’ve watched some of our Bakfiets go through five families over twenty years. They come to us for servicing, still running the same hubs and brakes and with no rust.’

The business has been busy but hasn’t had to focus on PR since the early days. ‘The initial users were really dedicated to the bikes. People on the fringes saw the sense in these bikes – kids arriving at school having had a fun journey with parents who hadn’t been exasperated by traffic jams. For people who come to live in Cambridge for just a couple of years, they see this as the normal way to transport children and their stuff. For them, it’s one of the ways into the local culture – something to talk about and share in. Most people like the two-wheeled Bakfiets model because it’s so agile, manoeuvrable and intuitive for anyone who already rides. But for those who’ve never ridden anything, the three-wheelers really appeal. The engineering of the bikes makes them so easy for different people to use. I used to do demos, but now people just come to buy, saying they’ve already tried their friend’s or neighbour’s.’

Undoubtedly, the bikes have helped alleviate local school-run traffic but Hugh’s keen to point out that their use has brought broader social benefits. ‘Up and down Mill Road you’ll see cargo bikes outside cafés and shops around school drop-off and pick-up times. Before, people had the habit of going once a week to the supermarket whereas now they’ve got the ability to stop at the butcher and the baker on the way to and from places. Last year, someone sent me a photo of the Newnham miniature railway with ten cargo bikes parked outside and I thought ah! I’ve really done something positive! Other times people come up to me and say: You’ve changed my life!’

Given the success of cargo bikes, you’d think that the council would be quick to capitalise on the benefits of increased use. They’ve installed a few dedicated cargo parking spaces and have recently used government funding to support active travel schemes such as School Streets, modal filters and cargo bikes for businesses. But looking around, it’s evident that support could be greater. When last year the owner of Hope Street Yard announced that Hugh’s business had to move, customers, Camcycle members and others tried to assist in finding new premises – but to no avail. Eventually, The School Run Centre was forced to move to a lifeless room up a steep set of stairs at the Gwydir Enterprise Centre – not ideal for showcasing and demonstrating heavy bikes. The workshop is in a big garage at 11a Hope Street and they are hoping to have more convenient premises at the Enterprise Centre soon.

So why is this successful business, which is in many respects an ongoing public service, sidelined in a building which isn’t fit for purpose? ‘Unfortunately, the commercial prices in Cambridge are much too high for the space these bikes need. It’s essential to be reasonably central to avoid customers needing a car to get to the showroom and there has to be a safe area for people to trial the bikes. But the local council can’t pluck something out of the air. They need support from central government. It’s all very well allocating emergency money for cycling, but there’s no central expertise. We need a countrywide policy which enables the business of bikes, rather than each council needing to do their own research. The government needs to talk to bike shop owners – the real experts – about what we really need to facilitate this shift towards active travel. We know what works and, through our own networks, have a pretty clear picture of how things need to develop in tandem with an overall traffic strategy. This isn’t a hugely profitable area so we need financial support to make bikes more affordable. Something like taking the VAT off cargo bikes for parents would make a big difference’.

Since the pandemic began, government interest in active travel has increased dramatically. You can sense that this is a tipping point for businesses like Hugh’s. He’s made no secret of wanting to retire to New Zealand, where he’s excited about every town embracing cargo bikes and opening cycle paths. He’s looking for someone to join the business here and eventually take it over, but it has to be the right person. ‘There’s a serious opportunity for expansion right now as interest grows and new brands are emerging. But we’re here principally for families and I don’t want to jeopardise our integrity by jumping to supply products which we can’t be completely confident about. After 20 years, there isn’t much we don’t know about cargo bikes. Someone new coming in needs to build that knowledge and gain trust as a seller. When it comes to transporting children, safety is the most important thing and people need to be absolutely confident that the seller is giving good advice. You don’t need hard sales skills – utility and quality sell themselves – but you do need to know what you’re talking about.’

If you’d like to find out more about joining The School Run Centre, contact Hugh at enquiries@dutchbike.co.uk or call 0777 273 8899.