Jamie Wood was frustrated with the results of campaigning for inclusive cycling in York. He decided to take action using the Equality Act – and encourages other riders with disabilities to do the same. 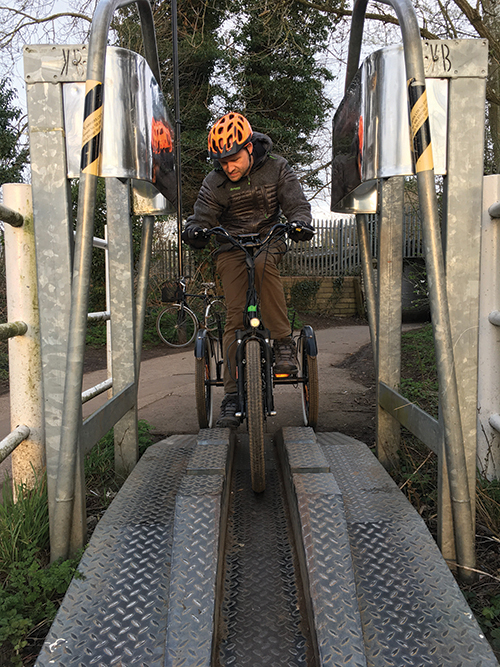 As an undergraduate in Cambridge 25 years ago I would happily pedal around the city without noticing barriers. It was no problem for me to dismount and walk. I’d not heard of the Cambridge Cycling Campaign – now Camcycle – but today cycle campaigns and the work they do are vital to me. I’m disabled: I was diagnosed with Multiple Sclerosis in 2003. Cycling has become the only way I can have some independence; it is also my primary mobility aid and way of exercising. I cycle to work each day. I can cycle the kids to school. I can cycle to visit friends. I even cycled most of the Coast-to-Coast route. Walk? Not much, maybe a few hundred metres with a frame or sticks on a good day, barely at all on a bad one. Multiple sclerosis takes its toll and creeps up slowly. Cycling is an amazing release for me, as well as a practical way to get around and a way to keep fit.

My cycle has changed as my needs have changed. I pushed the boat out for an e-bike over five years ago. A year and a half ago I added stabilisers to my bike, and a few months ago I shifted to a trike. Switching to a non-standard type of cycle has made me more reliant on good quality and accessible cycle infrastructure. Nowadays I’m unable to dismount and push and my cycling range has reduced. Being able to get to as many places as I can within my radius became more important than ever during Covid-19 times. Prior to the pandemic, I would do longer organised rides and have been on cycling holidays with my young family to both Ireland and the Netherlands.

With this backdrop in mind, I’ve now become frustrated with my local council in York. Over the past three years I have tried hard to engage with the council and work constructively and reasonably to improve cycle infrastructure. The sum total of my achievements is to have helped to get one post moved almost a metre. It’s an important metre and was a particularly annoying post, but still. In the same period of time, we’ve seen awful infrastructure put in, cycling levels flatline, key paths blocked at a moment’s notice, and decisions made that will cripple cycling in York for many years to come. I decided to take a different approach, not to be mollified by promises of consultation or reviews and see where things got me. I started complaining.

In October 2020, wanting to cycle further, I set off for a local green space known as Hob Moor, following a cycle route recommended by the local council. Now I did know there were barriers on the way but I wanted to see if I could get through on my new stabilised cycle. Nope. Firstly, there was no way I could get through the extraordinary footplates which defend this beautiful open space – I would be grounded on them, probably damaging my cycle and stranding me. Second, there is a bypass gate, locked with a Radar key. I brought mine with me. It quickly became clear I would not be able to manage it. That is because getting through this gate requires reversing at some point and my cycle can’t reverse unless I get off and push. I retreated and went home. Next is a list of what I did next.

1) I sent in a Freedom of information (FOI) request

This can be publicly seen on the website whatdotheyknow.com, but I can’t claim credit for it: it is lightly adapted from the brilliant letter written by Twitter-user Heavy Metal Handcyclist (@crippledcyclist). I received a perfunctory response that, at best, only partially answered some of my questions. This seemed to me to be an opening gambit to try and grind me down into giving up, so I moved to the next step.

I followed Doug Paulley’s website and his Disability Attitude Re-adjustment Tool (DART). My letter at pastebin.com/PinnQAPk can be freely used as a template. I’ve removed some of the more personal bits but summarised what they say. Essentially you send a letter to the other party indicating that you intend to take action and on what basis, clearly stating the timescale by which you expect a response. To my surprise the council didn’t respond to this.

This is where things get a little more complex. Once again, my particulars (at pastebin.com/V050vHh6) can be used as a template. You need to register on the relevant website (moneyclaim.gov.uk), make the claim and then issue particulars.

For many using the Equality Act (2010) who are entitled to legal support this is simple – choose the maximum amount (£10,000 at time of writing) and tick the box for an injunction. If you are not entitled to support – the position I was in – this will cost you money (just over £600 for everything) and is more complicated as you are not protected from the other party’s costs if it does end up in court. I went for a smaller sum and I didn’t go for the injunction. Days before the deadline the council offered to just pay me off and would not enter into negotiations for change. I accepted, disappointed, but there was no non-disclosure clause.

This was easier than I expected; writing the letters is the hard bit, but hopefully providing templates here will take the sting out of this for others, just as Heavy Metal Handcyclist’s letter did for me for the FOI. I was pushier than I would have liked to be, but I had reached the point where it seemed to be the only way, with my local council at least, to make something actually happen. But it still hasn’t. We seem to have reached a curious place with barriers at the time of writing – Local Authorities have responded to political and popular pressure to reduce anti-social behaviour and now choose to sail close to the wind with barriers, hoping no one will notice that they are in breach of the law. We must find alternative ways of addressing access issues. Simply placing barriers which break the law can only be described as equivalent to vigilantism.

I encourage anyone who is able to do so to take action using the Equality Act (2010). Section 6 must apply for you to take this action, but otherwise everything else you need is linked here.

When I cycled in the Netherlands it was the first time I have just thought I want to go here, and set off. No checking for any barriers en route, no worrying about this junction or that section. For someone with a disability this is incredibly enabling. Cycle campaigns will be an essential part of making this happen in the UK.

Mandatory disclaimer: please note that I am NOT a legal expert. This is not legal advice, merely my opinion and shared experiences.