A recent trend in urban design is the low traffic neighbourhood (LTN). LTNs are hugely popular with the people who live within them. One recent LTN implemented in Waltham Forest has reduced the volume of traffic within the neighbourhood by 15%, increasing the proportion of time that people walk and cycle every week and dramatically increasing the number of people walking and cycling to the local shopping street.

While the label low traffic neighbourhood is a recent coinage, the concept of an LTN is much older. The humble cul-de-sac is a low traffic neighbourhood in its most primitive form. Only people who live in or need to access the properties within the cul-de-sac would be driving in those streets. Nobody can drive through a cul-de-sac to cut between two main roads. Ideally, cul-de-sacs connect at their closed ends with a local walking and cycling network to allow travel throughout the wider area without having to use a car.

One of the chief benefits of low traffic neighbourhoods is that children have a lot more freedom to move around independently. Instead of being trapped inside a metal box, they can walk or cycle to school, visit local friends or do some local shopping. This helps them grow up with a better understanding of their neighbourhood, interact with different members of the community and feel more connected to the world around them. Meeting Cambridgeshire’s Vision Zero goals (to eliminate all traffic fatalities and severe injuries) will certainly require the safety provided by LTNs.

After two years, the number of motor vehicles registered dropped by 6.7%, over four times the impact seen in areas with more standard improvements to footways and cycle lanes.

The community was safer

There was a 70% reduction in road traffic injury risk within the LTN and street crime was down by 10%.

Houten, in the Netherlands, was an LTN design which began in the 1960s with a train station in the centre, an outer ring road for cars, and lots of quiet, access-only roads that connect with the ring road at one end, and active travel routes at the other. Most recent developments in the Netherlands follow these principles and they have been retrofitted into numerous existing neighbourhoods to improve quality-of-life. The Cambridge Local Plan states that new developments should not have through-traffic, but proposals do not always reflect this. For example, Waterbeach new town referenced the Vathorst development outside Amersfoort, but initially missed the key concept of an outer ring road, with the schools at the centre accessed mainly by footways and cycleways.

It is not just the Netherlands that can provide LTN examples. Bar Hill follows the same design principles at walking scale. There is an outer ring road where all the cul-de-sacs are connected, and a footpath network on the inside that connects all these roads with the local services, and the main bus stop. Nobody would drive along Pheasant Rise to get to anywhere other than Pheasant Rise, but you can still walk directly from here to the health centre, primary school or local shops without having to interact with motor traffic.

Low traffic neighbourhoods were retrofitted in several parts of Cambridge during the 1970s and 80s. The modal filters on roads like Gwydir Street and Hooper Street removed the ability to drive through the neighbourhood between Coldhams Lane and Mill Road. This effectively split Petersfield to the east of Mill Road into two cells: one side connected to Mill Road, and the other side connected to East Road and Coldhams Lane. The routes are still fully open for people walking and cycling, but the only people driving along these streets are those who live in the community or are visiting people who live there. 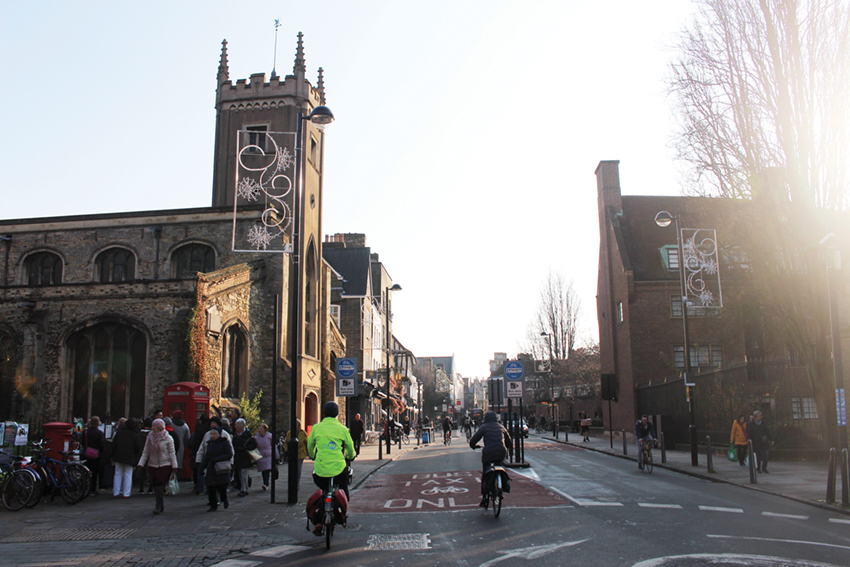 The core traffic scheme in Cambridge city centre is another example of a low traffic neighbourhood. The city centre has been split into multiple areas, with motor vehicle access permitted from only one side of the city. This means it is no longer possible to drive through the city centre in a private vehicle, as it was a few decades ago. Critically, through-traffic is still allowed if you are walking, cycling, in a taxi or in a bus. The only people driving within the city centre are either going to or from a car park or delivering something; they are definitely not driving through on their way from Huntingdon to Haverhill. This has reduced pollution levels in the city centre, and increased the number of people who can walk along the roads, encouraging a more attractive shopping environment. It has also made cycling through the city centre a more attractive option than it was before.

How do you create a new LTN?

First you have to work out the boundaries of the neighbourhood

Identifying the routes for traffic to take around an LTN is a very important first step. These should be the main roads, designed in a way that is suitable for handling motorised through-traffic, along with safe cycle lanes.

Next, split the inner area into cells

A minimum of two separate cells is required, but there can be more. Bar Hill has 18, Haringey Council’s new proposal (see image) has 25.

Once the cells have been identified, all roads that go across a cell boundary should be closed to motorised through traffic. Access for essential services such as refuse collection and emergency services needs to be considered, and the cell boundaries may need to be altered to allow these vehicles to turn around easily. The placement of cell boundaries in relation to schools and nurseries should be designed to reduce the volume of private vehicle traffic near children. Within the LTN, more space can be provided for people walking by narrowing roadspace and widening pavements. More trees should be added, along with space for cycle parking, and places for people to sit down and watch the world go by.

Can this be applied everywhere?

Yes, you can apply the principles of low traffic neighbourhoods everywhere. In some locations, it may require a few strategic modal filters, while others may need more expensive solutions. This may include expanding the LTN to create a larger area than originally imagined, or compromising and allowing some through motor traffic in a neighbourhood but at the same time improving these routes to make them safer for people walking and cycling.

If you would like to create an LTN for your neighbourhood, get in touch. Camcycle can help you liaise with your neighbours, discuss ideas with councillors and advise on where cells could be placed. Low traffic neighbourhoods provide an excellent way to reduce the total motor traffic, not only outside your house but also within the surrounding areas as well.