For a number of years, Cambridge Cycling Campaign has had concerns over the lack of compliance by motorists of the regulations regarding cycle lanes delineated by a solid line. The Highway Code says in rule 140 (formerly rule 119):

Cycle Lanes: … You MUST NOT drive or park in a cycle lane marked by a solid line during its times of operation. 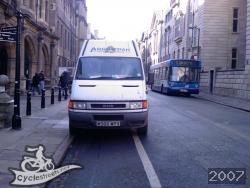 The law, in the form of the Road Traffic Regulation Act 1984, gives extremely few exceptions for this rule regarding Mandatory Cycle Lanes (MCLs).

Abuse by motorists of these lanes seriously degrades the provision for cyclists. MCLs are often used at just the locations where cyclists might be squeezed by motor vehicles, or obstructed by queuing traffic. Drivers illegally entering these lanes often do so without even checking for cyclists and, even where they do check first, cyclists are often travelling faster than the queues of vehicles and may be approaching in their worst blind spot. It is for these very reasons that MCLs are used at such locations to supposedly make life safer for cyclists.

We have long worked for better enforcement of regulations regarding Mandatory Cycle Lanes. Motor Vehicles MUST NOT enter such lanes, which are marked by a 150mm solid white line. Loading and Unloading is prohibited, as is entering to avoid vehicles awaiting opportunities to turn right.

The Traffic Management Act (TMA) 2004 (Part 6) includes the provision for Civil Enforcement of such ‘moving vehicle’ offences, and many other similar ones, removing the responsibility from Police Officers. Despite many promises, these powers have not been enacted.

In Summer 2011 we heard, via Julian Huppert MP for Cambridge, that Norman Baker MP, Under Secretary of State for Transport, had written to the leaders of 20 Local Authorities about the enactment of Part 6 of the TMA, but, following their replies that the DfT had decided not to proceed with enactment. We requested details of the letters and replies.

We consider that the consultation letter, consultation process, and the assessment of replies were all seriously flawed. There is clear demand from Local Authorities for these powers, but the DfT implies otherwise.

Our Briefing note has extracts from the replies from Local Authorities.

Newsletter articles on this issue

These short video clips illustrate the extent of the problem:

If linking to these, please link to this page rather than to the clips directly.

See here for a collection of images