This crossing was reverted back, in 2007, as a direct result of our Campaign. Thanks to all that helped. The turning ban remains and we want to see this problem fixed. There are also other aspects which could be improved. 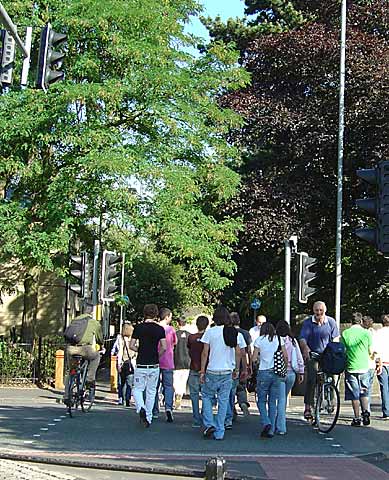 This crossing, which links Parker’s Piece and Gresham Road, forms part of a major cycle route to the Station and on to Cherry Hinton and beyond. The crossing has recently been altered by Cambridgeshire County Council and has, in our opinion, been made much less convenient and safe for both cyclists and pedestrians. Our correspondence is as follows:

Cycling England produced a (generally damning) report on the changes.

Cost of the works

This is a quote from a Freedom of Information request to the the County Council that we have been forwarded.

We have obtained these from the County Council. [Signatures have been removed.]

Census counts have been taken.

Progress as of October 2006

We attended the on-site meeting set up following our request for one. The following statement was then issued by the Chair of the Area Joint Committee:

On Friday 19 October there was a site meeting attended by two highways officers from the County, two cycling officers, by four councillors and by representatives of the Cambridge Cycling Campaign to review the changes recently made, without proper consultation, to this crossing. The CCC and councillors expressed their detailed concerns and officers provided their initial responses.

A full report on this matter is expected to be submitted to the January 2007 meeting of the AJC. In the meantime I have asked the officers (Drew Wallace and Terry Bedding) as a matter of urgency to prepare an interim and provisional report and to seek comments on it from councillors and from the CCC. If all parties are agreed on some modifications that could be made to the crossing on the grounds of safety and convenience without delay, then they could be implemented in advance of the full reports submission to the AJC in January.

Quotes from users of the crossing

Many people signing the petition have provided quotes about the crossing.

The Campaign submitted the following petition to Cambridgshire County Council on 5th October. This entitles us to speak to the Area Joint Committee meeting in mid-October. Thanks to everyone who signed.

The petition was signed by well over 500 city residents, an extraordinary number as the petition was put together, signed and submitted to the Council in just a few days. We were told by the County Council that those living outside the city were not eligible to sign even though the council tax they paid contributed to the cost of the crossing. Many use the crossing daily on their way to work. If they had been eligible, we have no doubt from the responses that we have received that the petition would have been signed by hundreds more people.

Photos of the gathering of signatures are available.

We, the undersigned, call on Cambridgeshire County Council to restore Gonville Place crossing and to make it again convenient and safe for both cyclists and pedestrians. In particular we ask that the following changes are implemented without delay: