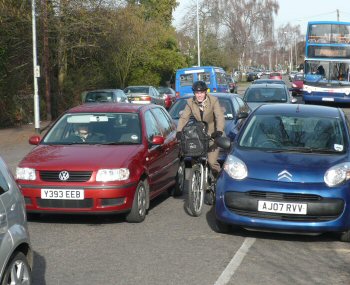 Cabinet members have made a decision on the Gilbert Road issue to approve 1.7m cycle lanes in which motorists cannot park. The safety of many children and other cyclists will be improved very considerably.

This has been a campaign running for well over ten years, and is the result of much tireless campaigning by our Gilbert Road Subgroup. We are pleased that the issue has finally been satisfactorily resolved.

Councillors failed to approve the proposals for modern traffic calming, but this will be considered at a later date, as we suspect the current illegal speeding will get worse.

The final step in enabling the lanes to be constructed was made on 19 October 2010 when Cambridge Traffic Management Area Joint Committee voted 9 to 1 to approve the formal Order (the lanes themselves don’t need an order; it was the restriction of parking that required it). Normally, this would have been a formality, but there was a very large number of objections, mainly from residents of Gilbert Road, who have persistently opposed the scheme for many years.

FAQ (prior to the decision)

On Tuesday 15th June, Councillors are due to make a final decision on whether to improve safety on Gilbert Road by disallowing parking in the cycle lanes. Opposition to these very sensible proposals has come from a group of residents who are eager to maintain their privilege of using public space to park their additional cars, in a street where virtually every house already has two car parking spaces.

Gilbert Road has for many years been the area about which we receive the most complaints from members of the public concerned about safety problems. At present, the presence of typically 20-30 cars parked in the cycle lanes – an anomaly in Cambridge – results in cyclists having to swerve around parked cars. The result is a very poor safety record. The proposed package of measures which disallows car parking in the cycle lanes, and adds modern speed reduction measures to deal with illegal speeding would result in safer and more cycling.

The Gilbert Road issue has been dragging on for many years. There has been much opportunity in the last six months for debate, and so the time for a decision is now. Councillors should bite the bullet and favour safety of cyclists and a better environment for residents, over the minority of people who park their cars in the cycle lanes.

The scheme is part of the Northern corridor Transport Plan which was adopted in 2003. Officers have studied the situation in the area and drawn up a number of proposals.

What exactly is proposed?

The proposals are to replace the current cycle lanes with 1.7m-wide advisory (dashed white lines) cycle lanes. Parking will be prevented by the addition of double yellow lines to disallow parking, and this prohibition will be enforceable by the existing traffic wardens. The second but crucial aspect of the scheme is a speed reduction measure that implements modern raised tables at the junctions and speed cushions at several points along the road.

When will the decision be made, and by whom?

The decision will be made at 10am on Tuesday 15th June, at the Kries Viersen Room at Shire Hall, Castle Hill. It is being decided not by the transport committee but by the top-level Cabinet, which consists of senior Councillors in the County Council. The nature of the Cabinet system means that all the Councillors are members who represent wards outside Cambridge. The meeting is open to the public and the agenda has been published. Members of the Campaign are strongly encouraged to attend if they are not at work.

Are there going to be any speed bumps?

No – the proposals are for not old-fashioned ‘speed bumps’. The traffic calming element involves modern speed cushions and modern raised tables, which cause no discomfort to drivers keeping to the speed limit. These have been used recently on Cromwell Road, which we have never heard of any complaint about. Residents of Gilbert Road will benefit from slower speeds, and cyclists and pedestrians will benefit from a safer road environment.

Who supports these proposals?

Who is funding the proposals?

What effect will refusal of this scheme have on future funding for cycling measures?

The most important reason to approve this scheme by far is the need to address the unacceptable safety situation on this road that does so much to deter cycling. However, if Councillors refuse to implement this scheme, it will send a highly negative message to central government about whether Cambridgeshire County Council is taking cycling seriously. Refusal will almost certainly demolish the chance of good future funding for walking and cycling schemes that benefit so many people.

What about pavement cycling?

The area suffers at present from high levels of pavement cycling, we believe because many parents are unwilling to allow children to cycle on the road given the current dangers. We do not condone pavement cycling, but it does indicate the need to address the source of the danger – cars parked in the cycle lanes. Allocating proper, on-road space, will mean that there will be little temptation for anyone to cycle on the pavement. Resident opposition to the proposals would be a direct cause of continued pavement cycling if the proposals are not approved.

How wide are the cycle lanes?

The cycle lanes will be 1.7m wide. This is wider than most cycle lanes in Cambridge. This width is half-way between the ideal width recommended by the Department for Transport (2m) and the minimum width (1.5m) they propose. Cambridge Cycling Campaign believes that 1.7m cycle lanes backed up with sprayed-on yellow lanes (i.e. not bumpy yellow lines) and traffic calming to deter speeding will lead to a vastly safer environment.

Would it be acceptable to defer the decision as one Councillor is proposing?

No. Councillors already decided to defer a final decision earlier in the year so that they could be assured that there were no alternatives to the scheme. Since then, much public debate and correspondence has taken place. It is time to make a decision before funding disappears. Councillor Mike Todd Jones has, at the very last minute, collected a petition asking for deferral on a claim that residents of surrounding streets have not been considered.

What will the effects be on surrounding roads?

We strongly believe that improving the road safety on Gilbert Road will have a positive effect on surrounding streets. The result will be more cycling in the area, and a reduction in parents taking children to school by car. The traffic calming does not involve old-fashioned speed bumps, so it is unlikely that any significant transfer of traffic to surrounding streets would take place. We believe that concerns about traffic displacement (which we think are not likely) can be dealt with by the addition to the proposals of an agreement to consider measures for slower speeds in these surrounding streets 6 months after the Gilbert Road changes have been made. We support measures to improve surrounding streets in this way, and want to work with residents to make a political case for this. However, reducing traffic problems is not going to happen while large numbers of people are put off from cycling on Gilbert Road.