This page charts recent developments on this issue.

The Area Joint Committee is recommended to:

The amendment (as passed as the motion above) to the AJC agenda item was made by Councillor John Reynolds (C) and seconded by Councillor Sian Reid (LD). The motion was passed by 8 votes (7 Lib Dems; 1 Conservative) to 3 (3 Labour).

Historic decision for the historic core

Cambridge Cycling Campaign welcomes the clear decision made yesterday by the Council Committee responsible for transport matters to suspend the historic city centre cycling restriction for a trial period, starting later this year.

Currently there is no adequate south to north cycling route through the city centre.

Campaigner Martin Lucas-Smith said “The current daytime cycling ban forms a real barrier for many journeys by bike. We have lobbied hard to have this ban overturned. We believe that pedestrians and cyclists can co-exist in the city centre and that a Pedestrian Priority Zone would be workable. Indeed, cycling is currently allowed on Sundays and causes few problems.”

Current government guidance states that “there are no real factors to justify excluding cyclists from pedestrianised areas” [see note 5, below].

We believe the proposed arrangements would simplify the current bewildering array of restrictions.

Our letter giving practical suggestions to the County Council

At the start of February we wrote to the County Council giving some practical suggestions.

We then received a reply from Richard Preston at the County Council:

Thank you for your very constructive letter. Your suggestion of a working group is a good way of taking this forward.

The Working Group, which will include Pedestrian Representation following a request from us for this, will meet at the end of March.

Councillors Blencowe and Durrant then tabled a motion to the meeting of the full Cambridge City Council on 24th January, which read:

This Council regrets the recent decision of the Cambridge Environment and Transport Area Joint Committee to support the removal of the cycling restriction in the historic city centre pedestrian zone.

The Council notes that the cycling restriction has been in place since 1993 and in the most recent official feed back survey in 2002 was supported by almost 75% of those who responded.

The Council further regrets that the Area Joint Committee should make such a decision without any prior consultation and discussion not only within the City Council itself, but with groups that are normally consulted on such city centre transport related matters.

It asks the Executive Councillor for Planning & Transport to ensure that all recognised groups who will be affected by this decision are now asked for their views and should it prove that there is support for the cycling restriction to be retained, that the Area Joint Committee be asked to reconsider its decision.

We immediately wrote to all City Councillors asking that this not be passed, giving our reasoning and a summary of developments.

We received several favourable responses from Councillors, some of whom remarked that our letter gave them amunition against the motion being put.

The Council substantially amended the motion during the debate. This amended version was passed, as follows:

This Council welcomes the decision of the AJC to lift the city centre cycling ban on an experimental basis, subject to consultation and evaluation using independent market research.

The Council notes that this will provide a valuable northbound cycle route through the city centre and that it will reduce the confusion surrounding the present restrictions, with the attendant compliance problems.

The Council notes that the AJC’s decision reflects recently reinforced Department for Transport advice that pedestrians and cyclists can co-exist in pedestrianised areas, and that experience in Cambridge supports this advice; the accident record where coexistence takes place in the historic city centre is good.

The Council recognises that public acceptance of this approach is important to the success of the experiment. Encouragement of responsible cycling will be important, as will its enforcement by the police. The Council welcomes both Cambridge Cycling Campaign’s paper on Responsible, Legal Cycling and the establishment of a working party to consider a detailed approach to implementation of the trial.

We note that much of the wording within this motion is taken from our own letter, surely a recognition of the quality of our arguments here.

This now means that the City Council as well as its transport committee joint with Cambridgeshire County Council, both explicitly support the experimental suspension of the ban.

Consultation by the County Council

The County Council have now started the formal consultation on the proposed changes.

Please write to the County Council, with your views on the proposed experimental suspension of the ban, by Friday, 22nd April 2005.

Coverage of the ban in The Times nationally

The Times published a short article regarding the ban on 17th August 2005.

The County Council issued an Experimental Traffic Order on the experimental suspension, which forms the legal basis for this change.

The County Council has distributed tens of thousands of leaflets regarding the changes:

As of 12th September 2005, the daytime cycling ban in the main historic centre has been suspended for an experimental 12-18 month period. We call on all cyclists to ride responsibly in this area and to respect the needs of walkers. The above leaflets have been published by the Councils and are being distributed in town and in the local papers. 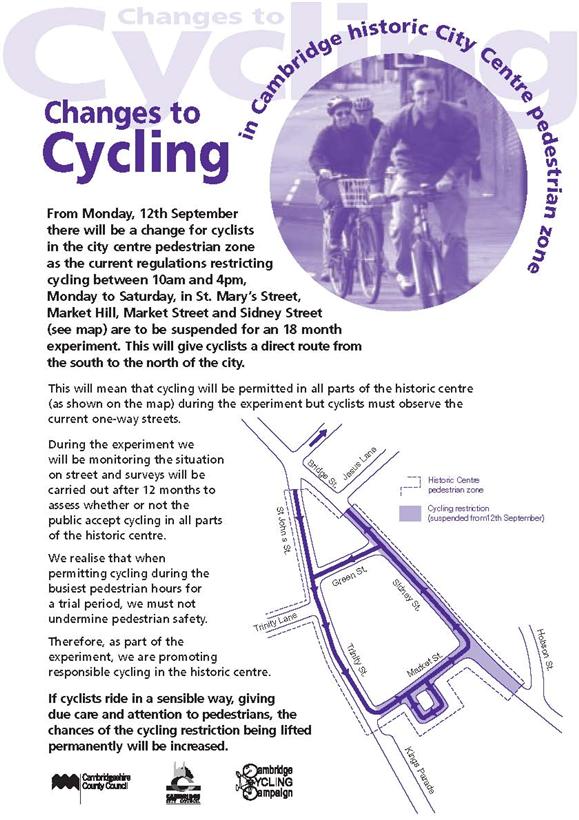 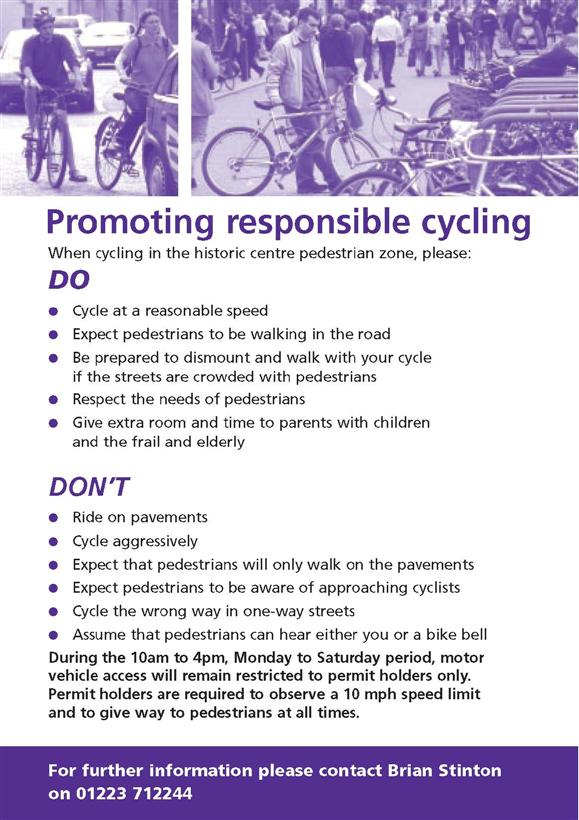