Film: Cambridge Cycling in the City 2007 by Simon Nuttall, in association with Subsequent Video. 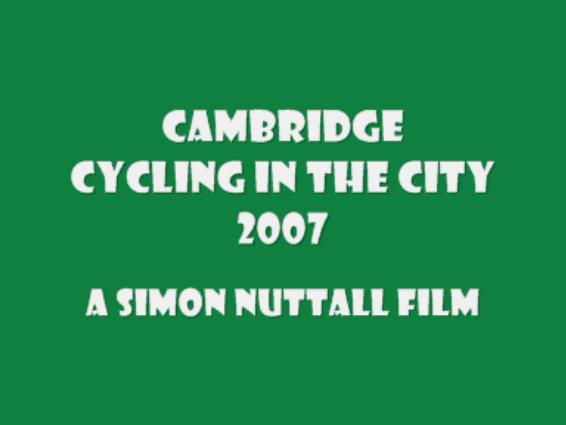 Simon’s film about 12 years of campaigning in Cambridge, shot in September and October 2007.

You can also download this Theora ogg version [40MB] (or high resolution version [107MB], probably best saved to your disk) and play it on your system’s own player.

The comments and images here are not necessarily the policy view of the Campaign but reflect the views of the original submitter.

“A brilliant campaign film re cycling in the City. I heartily endorse the points you make. All of the niggles that make daily cycling so frustrating are there. Thanks for the really positive image of good responsible cyclists – of which I hope I am one. I count my blessings daily that I live in Cambridge where cycling is recognised as normal behaviour. Keep campaigning! You have my support.” – from a campaign member, 12 October 2007

“I liked the film Simon, but you made one mistake. Although it may be against the law to ride a bike in a pedestrian area, it is not necessarily anti-social behaviour. Its possible to ride a bike perfectly legally on any street, but in an anti-social way.” – personal comment from another campaign member (who is a district Judge), Mid November 2007