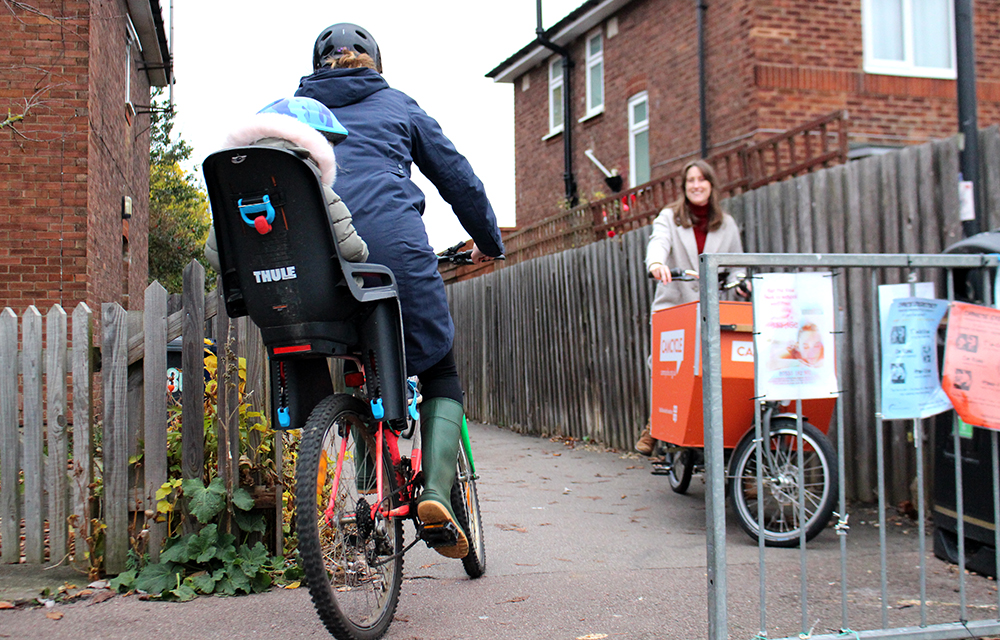 At the end of last year, we discovered that the popular route incorporating Oxford Road and the Windsor Road/Warwick Road passageway was under threat from a plan which would introduce additional conflict for people cycling and walking, along with new 90-degree turns and barriers which would make it difficult for those riding larger cycles to use it. Thanks to your support, the changes were put on hold. Now we need your help again to stop a slightly-revised version of the original plan going ahead at a cost of nearly £300,000 of public funding.

TAKE ACTION!
Please write to Cllr Catherine Rae by Friday 11 March, calling for a revised design based on the ‘possible layout’ she has circulated in her recent leaflet, with full and easy accessibility for disabled cyclists as well as families using cargo cycles or cycle trailers.
Read on for more information and advice on topics to include.

Why is it important that I email now?

Cllr Rae, who is the local county councillor, has produced and distributed a flyer requesting comments by Friday 11 March. It discusses a ‘proposed layout’ that has minor and insufficient changes to the complicated and inaccessible ‘pants’ junction (as one member dubbed it) that we raised the alarm about back in November.

However, it also includes a concept drawing of a much simpler and more sensible ‘possible layout’, which effectively keeps things as they are but with some small improvements, including a fix to lack of visibility problem at the driveway of 36 Windsor Road. We recommend pursuing a refined design based on this ‘possible layout’, with full accessibility for disabled cyclists and families with cargo cycles or cycle trailers.

We need you to write in support of a safe, accessible route as soon as you can.

You could share your own experiences of this route, particularly if you believe your access would be affected by the proposed design with additional barriers, and we suggest that you include some of the following topics:

We recommend addressing your email in support of a better solution for Windsor Road to Cllr Rae, along with Cllrs Shailer and Beckett who are on the council’s Highways and Transport Committee. We appreciate it if you copy us in as well.

Last month, the county council quietly rolled out a new drawing for the Windsor Road / Oxford Road junction. The junction is a key link in the designated cycle route that runs along Gilbert Road and Warwick Road, past the Mayfield Primary School, through a passageway and continues via Oxford Road to Huntingdon Road. The new design still contains the seeds of conflict between pedestrians and cyclists, crunching them together at a blind corner in a fenced-off narrow space. The use of such fencing is known to increase driver speeds:

Guard rails have served the purpose of channelling pedestrians in many ways, ostensibly protecting them from traffic but in reality allowing faster vehicle flow.”

Furthermore, the new design fails to respond to the problems raised by the safety audit in the autumn, in particular, the increased risk of collisions between pedestrians and cyclists due to insufficient cycle provision.

Let’s look at the differences between the November version and this new one:

What do the safety auditors say?

We requested a copy of the safety audit for the project and it confirmed our fears: 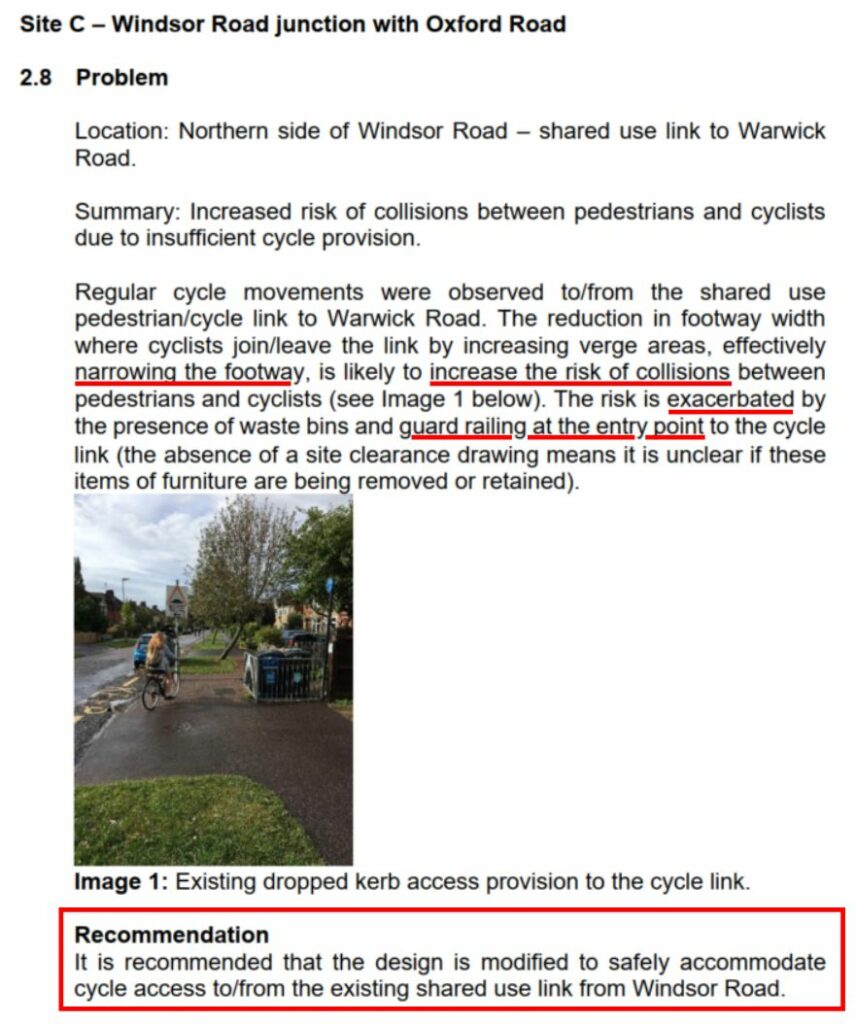 The safety auditor has noted the same problem that we have: by removing the dropped kerb and replacing it with verge, the scheme increases the risk of collisions between pedestrians and cyclists. They also note the problem of the existing road clutter, the waste bins and the existing fencing/guardrailing, all of which contribute to increased risk of collisions.

This scheme is not going to deliver ‘traffic calming’ if it goes through as proposed.

It prioritises driving at the expense of walking and cycling.

It does not live up to the county’s own policies nor the government’s policy, Gear Change and LTN 1/20.

Please write to the following councillors and let them know how you feel:

We appreciate it if you copy us in too: <contact@camcycle.org.uk>.