Camcycle is delighted that the first phase of the Chisholm Trail has been opened. Contractors finished up on 23 December and a low-key opening ceremony took place in the afternoon. Jim Chisholm cut the ribbon at the Abbey-Chesterton bridge with Cllrs Dave Baigent and Neil Gough from the Greater Cambridge Partnership Executive Board and Cllr McDonald, Chair of Cambridgeshire County Council’s Highways and Transport Committee.

This section includes two fantastic pieces of infrastructure that will transform walking and cycling in eastern Cambridge. The new Abbey-Chesterton bridge connects East Chesterton to the Barnwell community on the south side of the river and the wider Abbey ward. The Newmarket Road underpass gives people a safe, traffic-free route beneath one of the city’s busiest access roads. The bridge and underpass are connected by new active travel paths leading between Cambridge North station and Coldham’s Lane, opening up access to the historic green spaces of Ditton Meadows and Coldham’s Common for many more people in this area of the city.

This is a fantastic Christmas present for local communities who have waited so long for this route to be finished. It will be the perfect place for children who have received a cycle from Santa to test out their new wheels and a vital new link from residential areas to local schools, shops, jobs and activities. Thousands more people now have new options for their everyday journeys that involve cycling or walking away from busy roads, and that are more enjoyable and convenient than driving.

The Chisholm Trail is named after Camcycle member and former trustee Jim Chisholm, who started campaigning in 1998 for a route that would connect the Science Park with Cambridge railway station. With a nod to a famous Wild West cattle trail, the name has stuck from the route’s placement into the Local Plan in 2005 to the Greater Cambridge Partnership project which has finally brought Jim’s dream to reality. Construction of the second section of the Trail, connecting Coldham’s Lane with Cambridge station (and the southern busway path to Addenbrooke’s), is due to begin in 2022. 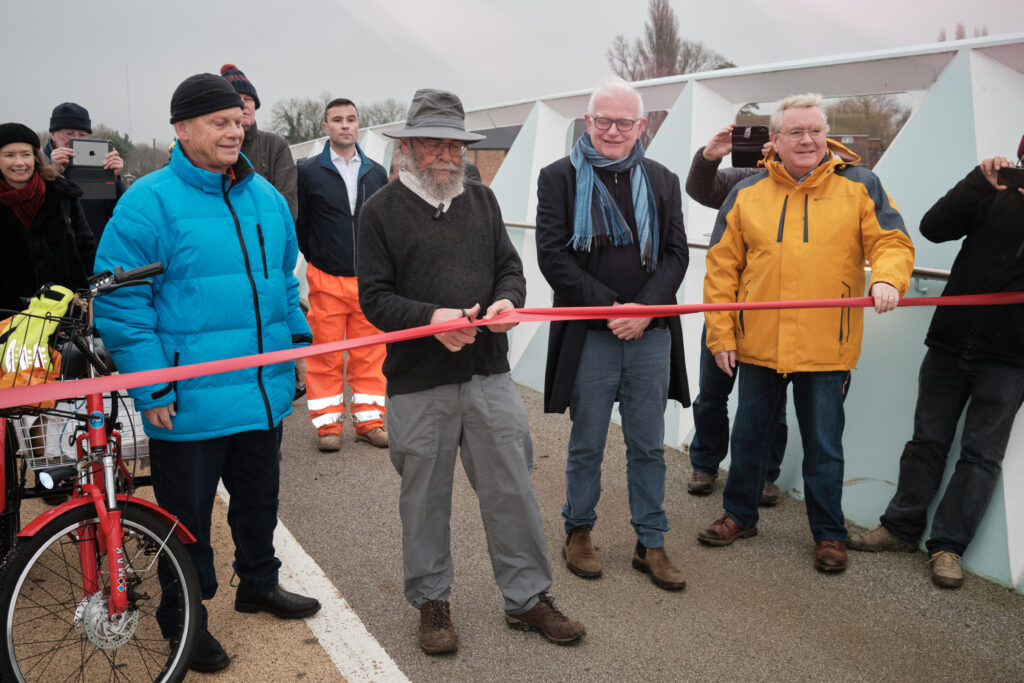 My professional background in transport modelling helped me realise that providing high-quality active travel routes in and around Cambridge would enable many more people to leave their car at home. It’s predicted that around four thousand walking and cycling trips will be made on this new route each day, bringing health and wellbeing benefits to individuals and reducing congestion and air pollution for everyone in the city. I have always envisaged this route as a ‘linear park’, suitable for everyone, and look forward to seeing a wide range of people walking, cycling and wheeling along the route in the coming months.

Alison Thompson, who cycles with her children from Abbey to their school in Chesterton, said:

Cycling is the most practical, efficient and enjoyable mode of transport for our family and it has been great seeing our kids develop their confidence and ability as cyclists. The new Chisholm Trail route gives us a direct link across the river to school and will reduce congestion on the Green Dragon bridge which was previously the shortest way to cross. I love that I have lived and worked here for over 10 years and never had the need to own a car – it’s one of the unique and really special things about Cambridge.

Camcycle would like to thank everyone who has campaigned for, and worked on, the Chisholm Trail over the last two decades, bringing the UK’s leading cycling city a truly world-class active travel route. This opening could not have happened without Jim’s vision and the support of local volunteers, national campaigners, councillors, officers and contractors. Special thanks must go to Sustrans’ founder John Grimshaw and county council cycling officers Clare Rankin and Patrick Joyce who played an invaluable role in developing the project, and to the Greater Cambridge Partnership for its final delivery.

We are so proud of what has been achieved and will continue to work with local authorities on ideas to enhance and improve the route and to enable as many people as possible to enjoy the Chisholm Trail for years to come.