The Greater Cambridge Partnership is planning the official opening of the new Histon Road at noon on Thursday 21 October. Everyone who wishes to attend is invited to meet at the remodelled Warwick Road / Gilbert Road / Histon Road junction. While there are many problems with the overall Histon Road scheme, this at least is an appropriate choice because it will highlight a style of junction new to the Cambridge region, with a design that offers strong protection to pedestrians and cyclists. We believe this type of junction will soon become a lot more common.

This type of junction is known in Local Transport Note (LTN) 1/20 Section 10.6 as the ‘Circulating Cycle Stage Junction‘ however it is more commonly called the ‘CYCLOPS‘ junction in Manchester, where the initial examples were developed and built.

Here at this site in Cambridge, the design also incorporates some old-fashioned elements such as Advance Stop Lines, making it a kind of hybrid design of old and new.

The key safety feature of this junction is that it offers cyclists the possibility of being completely protected from motor traffic as well as staying separate from foot traffic. You can get that protection by sticking to the off-road cycleways around the outer edge of the junction. They have signal-controlled crossings, so that you only cross the junction when all motor traffic is stopped. Pedestrians have their own crossings of the road, in parallel with cyclists. Where pedestrians must cross the path of cyclists, there are well-defined formal pedestrian crossings of the cycleways.

Let’s take a look at how it works. The traffic signals will be programmed to operate in three stages, shown below.

It is expected that cyclists will easily be able to traverse more than one segment of the ring in order to make right turns or even U-turns in a single stage. For example, someone who wanted to cycle from Warwick Road to Histon Road (southbound) would be able to make a fully-protected right turn like so: 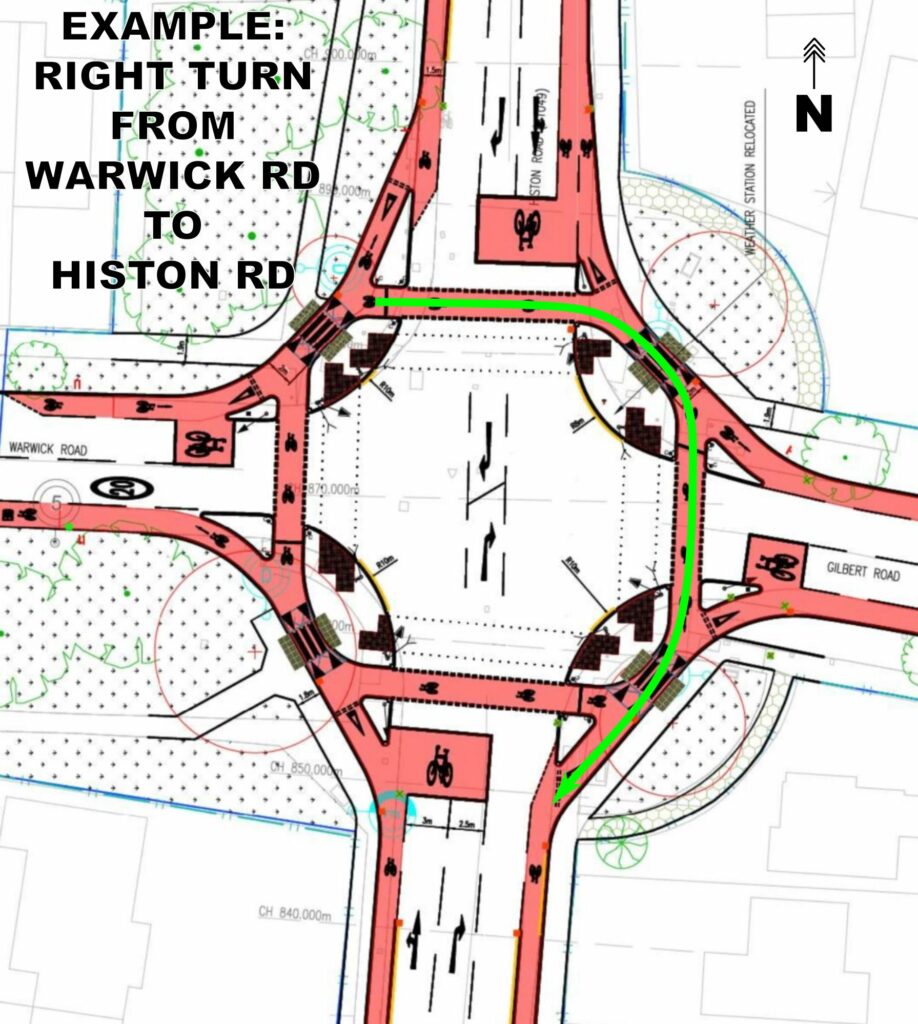 Of course, said cyclist could also stay on the Warwick Road carriageway, wait for the green light and then make a right turn as usual while giving way to oncoming traffic. However, it will rapidly become apparent that making this manoeuvre the old-fashioned way is both less safe and less efficient. Due to the way the signal stages are arranged, cyclists on the outer ring will be able to finish their manoeuvre before cyclists who stay on the carriageway get to start moving.

In a way, this new junction design simply formalises a behaviour that was occurring informally before the renovation. People who didn’t want to mix with motor traffic at all, such as families with young children, were pressing the pedestrian crossing buttons to stop all motor traffic. You weren’t supposed to cycle during the pedestrian stage in the old arrangement, but it was obviously much safer to cycle when all motor traffic was stopped, so that’s what people did. The design on the ground has now caught up with the users, and accommodates them properly, as any good design should do. Even better, it provides separate crossings for pedestrians and cyclists in order to minimise any potential for conflict there.

We look forward to observing this junction in practice. Some tweaks are likely to be needed as the officers gain experience managing it. One apparent issue is the placement of the crossing buttons for cyclists: some of the buttons seem like they will be a bit out of reach for some folks, especially disabled cyclists using recumbent cycles. That will need to be fixed. In fact, it should not even be necessary to press buttons if detection circuits were installed. Another issue that will need attention is timing: the length of time given to Stage 1 must be long enough for people of any age or ability to safely cross. We would also like to see an extra stage added between Stage 2 and Stage 3 — perhaps call it Stage 2.5 — that gives cyclists another chance to cross the junction and reduces waiting times. This is a common technique found in similar junctions in the Netherlands.

However things go, we believe the new design will greatly enhance the safety and usability of this junction, and enable and encourage more people to cycle. Three more junctions are planned for the Milton Road project. Now that this Circulating Cycle Stage Junction is an official recommendation of LTN 1/20 we expect to see it considered for every new or renovated traffic signal junction. Along with other junction designs such as the protected walking and cycling roundabout also found in LTN 1/20, there are now good options for every situation, and no excuse not to design safe junctions all throughout Cambridgeshire and Peterborough to save lives.