Following our campaigning with local groups last year, Camcycle is pleased to see significant improvements for cycling in proposals for new development near Cambridge station. However, we are still concerned that the plans don’t do enough to protect the route of the Chisholm Trail, provide for expansion of cycle parking facilities and ensure safe cycling along the most obvious desire line to and through the station area.

Our official response to the planning application (21/00264/FUL) outlines the details of our concerns.

Those interested in the plans for this area should know that the development in question concerns buildings ‘F2’ and ‘B2’ or the Devonshire Quarter, part of the wider CB1 development around the station. In October, city councillors refused a planning application put forward by Brookgate and Network Rail for offices, an aparthotel and a multi-storey car park in the area between Station Square and Devonshire Road.

Cycling was one of the key reasons for refusal: the proposals submitted failed to safeguard the Chisholm Trail as specified by the city council’s 2018 Local Plan, did not prioritise the needs and safety of those walking and cycling, did not support the high-quality cycle infrastructure commensurate with Cambridge’s position as the UK’s leading cycling city and failed to abide by Local Transport Note (LTN) 1/20, the government’s latest guidance on cycle infrastructure design.

As well as being a transport hub with offices, homes and shops, the area around Cambridge station is also an important travel link between major employment and residential sites in the north and south of the city. The cycleway and footpath alongside the guided busway is one of the busiest active travel routes in Cambridge and the forthcoming Chisholm Trail will bring many more cyclists to this area. Connections across the station area should be clear, seamless and safe.

While we will continue to campaign – as we have for many years – for a direct route through Station Square, we believe that with the latest planning application we are seeing something that resembles a safe cycle route through the area. This would not have happened without the dedicated campaigning of Camcycle, Smarter Cambridge Transport and local residents’ associations, and the political will of local councillors who forced the developers to do better. We appreciate the work that has been done to accommodate the Chisholm Trail within the footprint of the new development site.

These are our remaining concerns: 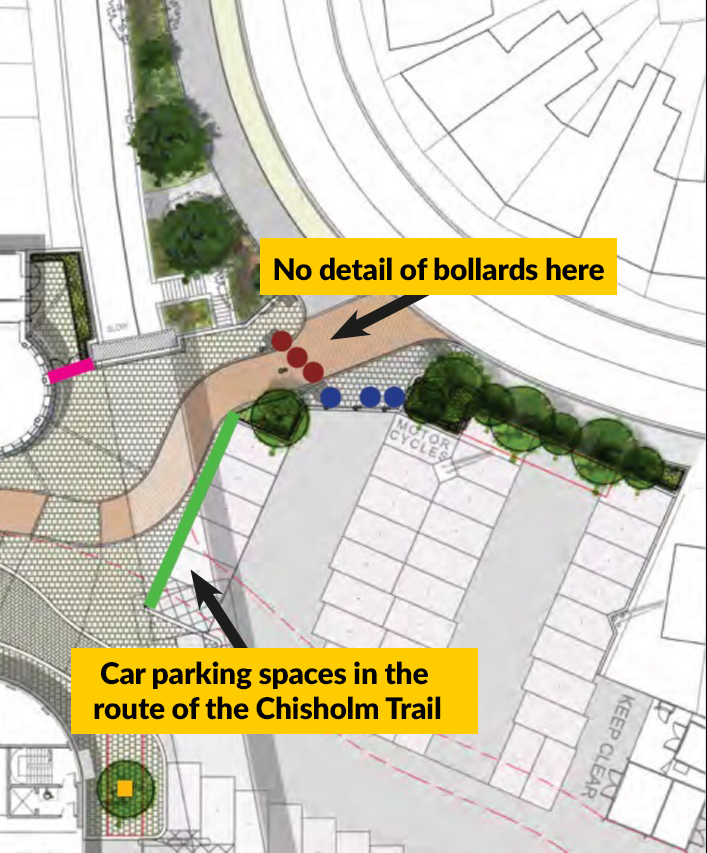 Part of the route is proposed as car parking before the Trail is installed. There is a risk that there would be resistance to these spaces being removed once the time came to convert them to part of the Trail. This land should be reserved for the Trail now; it should either not used as car parking at all or be made part of an explicit condition that it will be made for a cycle route on request by the county council.

The new route must be accessible to all

The gaps between the bollards behind One the Square will need to realigned to at least 1.5m in line with LTN 1/20 and access controls on Devonshire Road should also meet these standards – current plans do not include layout and dimensions of the bollards here.

Camcycle would like to be involved in the design of the ‘cycle friendly’ traffic calming measures on Mill Park Road (shown as ‘Mill Place’ on the diagram) to ensure these are compliant with the guidance on inclusive design. We would also like to ensure that the location of the ‘metal screen to conceal cars’ adjacent to a bend in the Devonshire Road cycleway link does not affect the use or safety of the cycleway.

There must be scope for a future expansion of cycle parking

The applicant claims that the proposed multi-storey car park could be partly converted into a cycle park in the future, but we think the latest designs render this impossible. We would like to see a reasonable indication of how this conversion would take place and how it would be connected to the existing cycle park.

An existing staff cycle parking area in the CyclePoint has also been allocated as ‘guest parking’ for one of the new buildings. We object to this attempt to overload an existing cycle facility.

Desire lines through the square are not shown in the diagrams in the developer’s Transport Assessment, but must remain available for cycling for those who need them. The lack of a better route in this direction is still a matter that will need to be addressed, including a complete reconfiguration of the dangerous mini-roundabout.

Despite the diversion of the Chisholm Trail around the back of One the Square not being compliant with the directness principle of LTN 1/20, we have accepted it as a compromise given the constraints of the site as it is today, the dangers of the mini-roundabout and the compliance with the other principles of LTN 1/20. We are disappointed that the site was not better planned from the beginning, but feel the current proposal at least moves the situation forward. It is important to work with what is achievable under the current circumstances and see the aforementioned issues resolved.