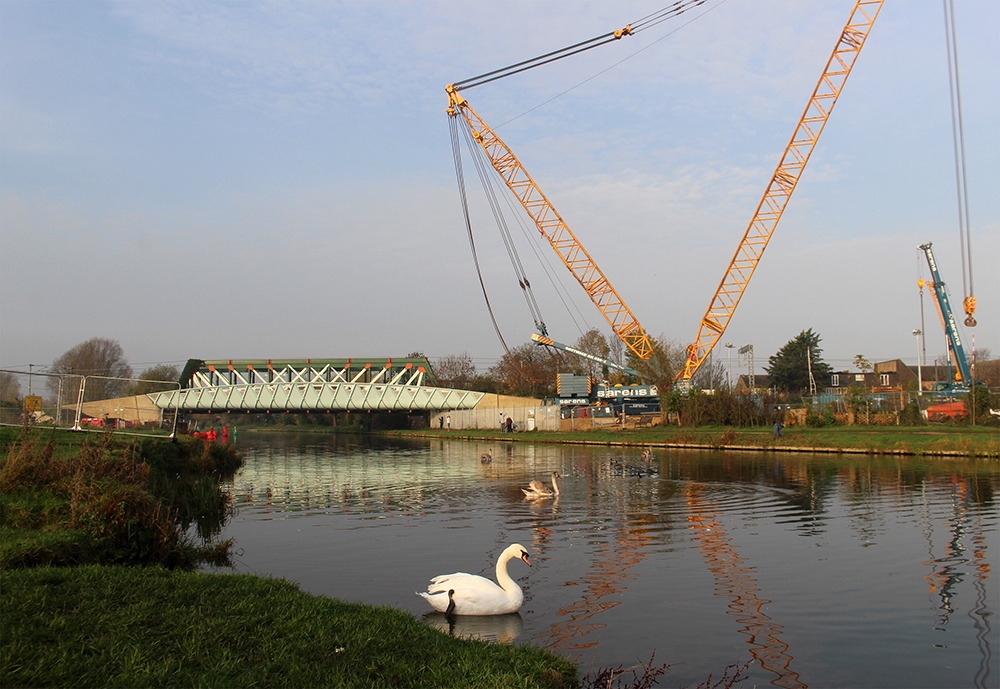 The 40m span of the Abbey-Chesterton bridge was lifted into place across the River Cam in the early hours of Sunday morning, a significant milestone in the progress of the Chisholm Trail. When complete, the Chisholm Trail will be a new mostly traffic-free route stretching right across the city, from the business parks and communities in the north to the Biomedical Campus and residential areas in the south. Phase one of construction will deliver the section between Cambridge North station and Coldham’s Lane and is expected to be open in autumn 2021. 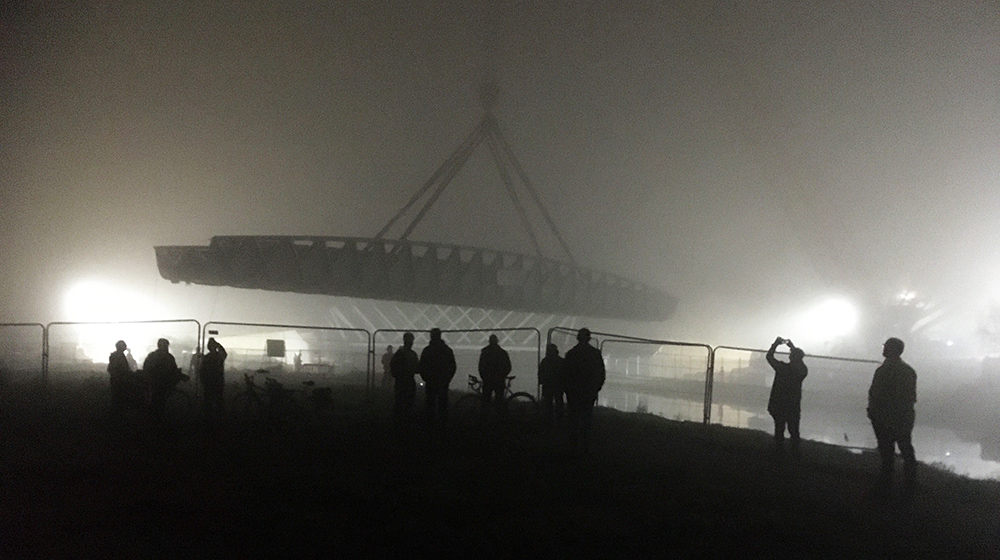 The lifting of the bridge went smoothly overnight despite foggy weather conditions and was welcomed by local residents as they came to inspect it in the morning. On the Abbey side of the bridge in Ditton Meadows, Hilary Cox Condron said, “I think it’s lovely to see that so many local people have been following what’s happening here and that we’re all out as the mists rise to come and have a look at this new bridge. There’s been lots of bridge-building going on this weekend.” A local artist, she worked with HistoryWorks on the Chisholm Trail Tales art project to engage local communities in the history of the area surrounding the Trail’s route and the shaping of its future. She added, “We’ve got such a rich history and community here in Abbey and it’s important that it’s invested in and celebrated,” adding that the restoration of the jetty link under the two bridges was an important connection for those living in the area. This section, part of National Cycle Network Route 51, was expected to open this autumn but has recently been rescheduled for spring 2021. 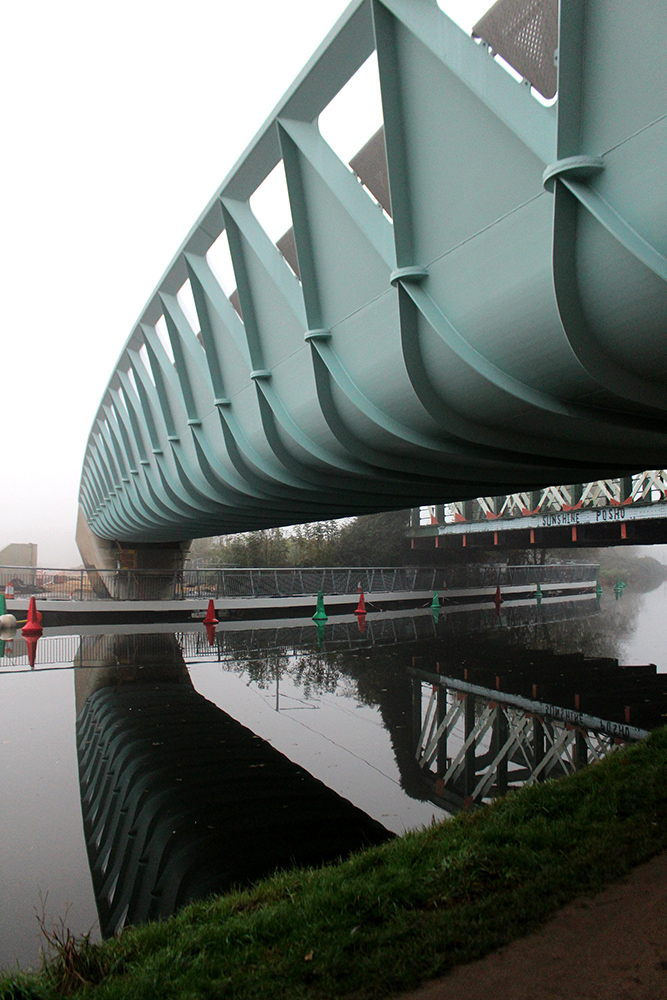 Also admiring the bridge from the Ditton Meadows bank was James, who is looking forward to a faster commute when the Trail opens next year. He said, “I’m a cyclist that uses the route between Addenbrooke’s and north Cambridge every day (when we’re back in the office). I’m very excited to see the new bridge open – a big thank you to Camcycle and Jim Chisholm and everyone who’s campaigned for it.”

The initial idea for the Trail was published in Camcycle’s newsletter by Jim Chisholm in 1998 and has been championed by Jim and many others within the organisation ever since. He thanked all those who had supported and believed in the project over the years and said “It was always envisaged that this new cycling and walking bridge would enable many in Abbey and Chesterton wards, and beyond, to embrace active travel. Many journeys will soon be quicker without using a car. I’m really looking forward to cycling across Coldham’s Common, enjoying a coffee in the café beside Barnwell Lake (now under construction), diving under Newmarket Road past the Leper Chapel, across Ditton Meadows and over the new bridge.”

Two children on the Chesterton side were excited about travelling in the other direction. Saskia said she thought the bridge was really big and it would help her to cycle from Chesterton to see her friend on the other side. Hugo, aged 5, said he loved the new bridge. He said, “I want to cycle over it and go to Ditton Meadows!” 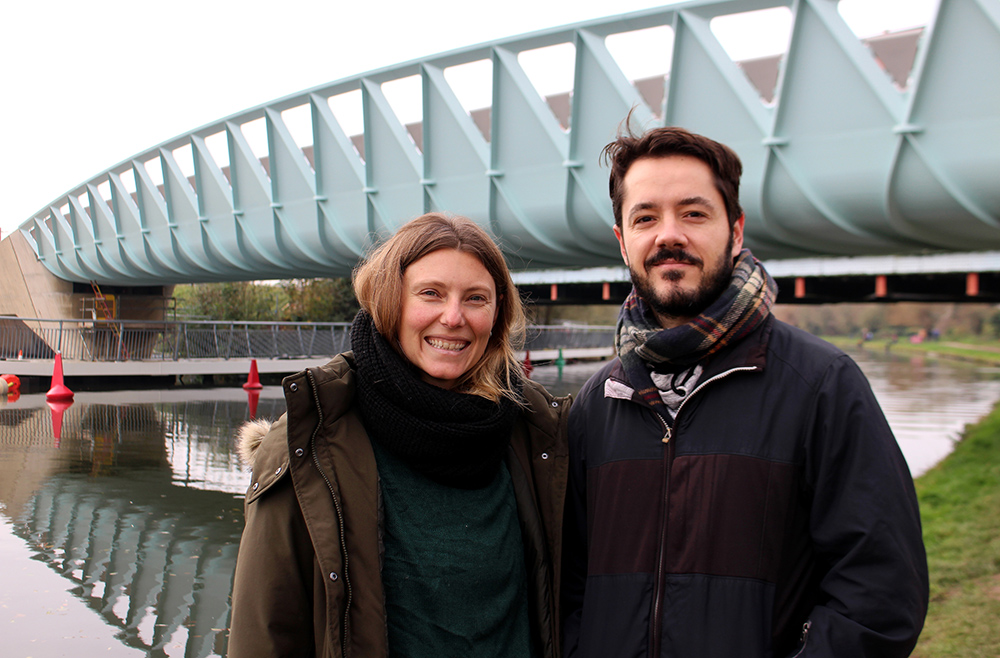 Matt and Sam (right), walking along the towpath, welcomed the new connection. Sam said, “We live quite close to the Green Dragon [pub] and that bridge is always a bit of a hazard because it’s so heavily trafficked. So I’m also excited that it will be easier to walk across that bridge because some of the cyclist traffic will come here. As someone who both walks and cycles, I think it’s nice to have more options and more cycling-friendly routes. Part of what makes it really lovely to live in this area is how you can just get around – everything’s really accessible so we’re excited that there will be one more way to do that.”

The Chisholm Trail is being delivered by Cambridgeshire County Council and the Greater Cambridge Partnership (GCP), working with contractors Tarmac. In a press release published on Monday, Cllr Roger Hickford, chair of the Greater Cambridge Partnership and deputy leader of Cambridgeshire County Council, said, “To see the Abbey-Chesterton Bridge over the River Cam is a really significant and exciting moment for councillors, cycling campaigners and the community who have long championed the Chisholm Trail. There is more work still to be done before people will be able to use the bridge and the trail, but when it has been completed it will provide a first-class walking and cycling route that Cambridge can be proud of.”

Roxanne De Beaux, Executive Director of Camcycle, said, “We’ve seen so much excitement around the Chisholm Trail on social media this week and out in the communities surrounding the new bridge. It’s great to see different areas of the city coming together to support more cycling and walking for all ages and abilities, along with increased access to Cambridge’s precious green spaces. Camcycle campaigners have worked so hard over the past two decades to share their vision for a healthier and more sustainable city and we’re so grateful for the support of all those who have championed this route, from Jim himself to national campaigners, local councillors and cycling officers. During the pandemic, we’re continuing to campaign for more safe space for people to walk, cycle and spend time outdoors and empowering local communities to work together for streets and neighbourhoods that are welcoming places for everyone.”