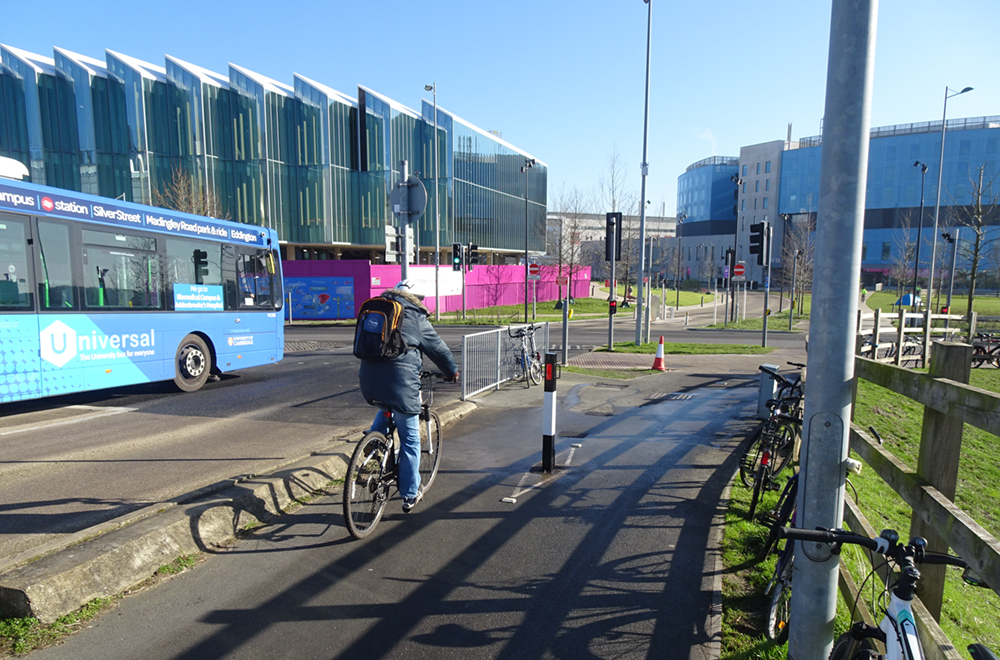 On the morning of Thursday 6 February, we were delighted to see the metal barriers on the Busway path near the Cambridge Biomedical Campus finally being removed. This is the result of some excellent campaigning from members and supporters over the last few weeks following the shock of their installation on 8 January on one of the city’s busy cycling and walking routes.

The barriers were of an outdated design incompatible with the Equality Act 2010 as it makes use of the cycleway more difficult for disabled people. They were very difficult to navigate with cargo bikes and trailers. People passing through the barriers needed to resume cycling, up a very steep hill, from a near standstill. They created a dangerous pinch point, further increasing conflict between people walking and cycling on a congested path and raising the risk of people falling onto the Busway while trying to manoeuvre through the barrier. We received informal reports of at least two damage-causing collisions with them.

In the days after the barriers went up, a consensus developed among councillors, officers and the public: the barriers must go. Over 1,600 people signed a petition set up by a local councillor and others contacted local officials and employers and raised awareness in person, in the press and on social media, and through posters and leaflets. Camcycle discovered that the decision to install the barriers had been instigated by officials at the Biomedical Campus, who convinced the landowner Countryside Properties to install the barriers, with the blessing of one of the county council’s Busway officers. However, there was no further consultation, and several highways and cycling team officers confirmed that they would never have countenanced such an action. We spoke at the county’s Highways and Infrastructure committee, putting forward the fact that much of the local authorities’ plans for transport in Cambridge depend on this key link and others like it. Then we asked: ‘are all those plans, with public money behind them, at the mercy of the whims of private developers, with no recourse nor consultation about what’s going to happen? For the sake of having a joined-up, inclusive and sustainable transport strategy, we need to find a way to ensure that this doesn’t happen again, here or elsewhere’.

The landowner has now replaced the metal barriers with a single magpie bollard in the middle of the path. Thanks to all who have helped us reach this point so quickly; however, there is still work to be done. We need now to begin a conversation about how to deal with the problems at the Francis Crick Avenue junction, which was designed without sufficient thought for the numbers of cyclists and walkers, much less such intensive usage. By improving the extremely poor design here, further conflict and confusion can be avoided and the area can be made safer for all.